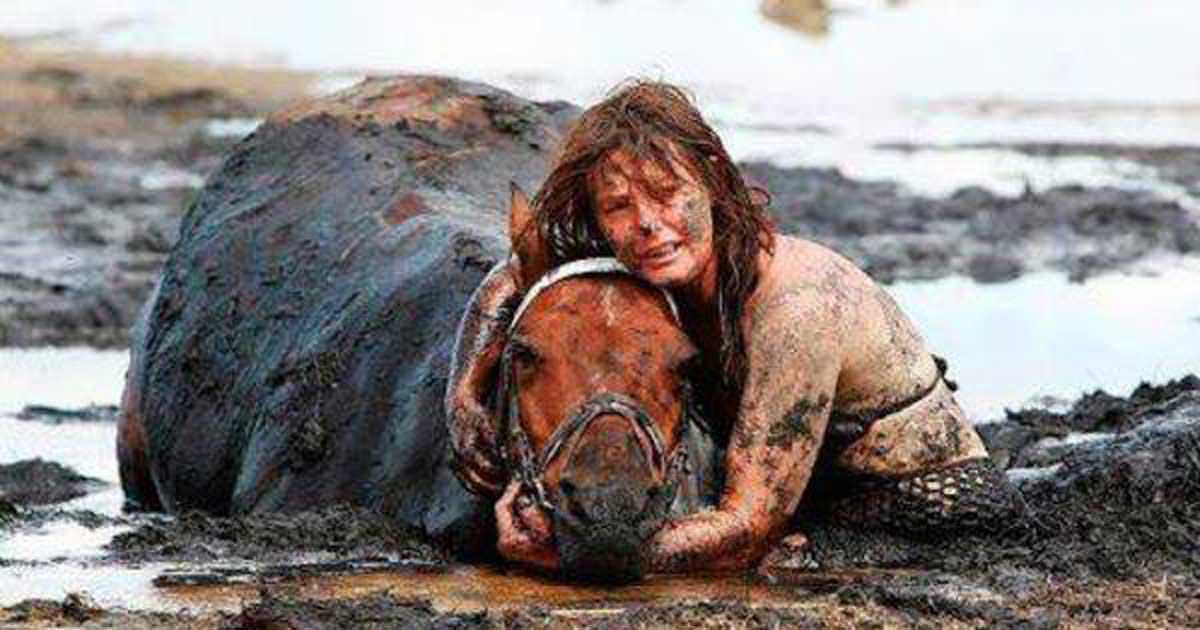 Anyone who has ever been by the ocean knows that it can be unpredictable. One thing you should never underestimate is the tide; it can be treacherous if you find yourself in the wrong place at the wrong time.

The tide can surprise and swallow people and animals in a matter of seconds, and in some cases it can lead to a slow and cruel death. This was almost what happened to an 18-year-old horse named Astro.

Astro’s owner, Nicole Graham, and her daughter were riding their horses along the beach near Geelong, south of Melbourne, Australia. But after a while, the horses found themselves on soft sand and the ground below them turned into a muddy death trap.

Nicole’s daughter and her horse managed to get escape, but she and Astro sank deeper into the mud. Astro was soon up to his neck in clay and risked choking to death. Nicole spent three hours by Astro’s side in a battle of life and death.

The more time Astro spent in the mud, the more desperate the situation got. During this time, Nicole had to keep her 1,000-pound (450 kg) horse calm to stop him from sinking deeper into the mud. After three hours, Astro was close to suffocating and faced the possibility of dying of thirst and fatigue. In addition, the tide was on its way in.

Fortunately, Nicole’s daughter was able to get safety and call for help. Eventually, a rescue team and a veterinarian arrived at the scene. To stop Astro panicking, the veterinarian injected him with a sedative. Nicole stayed with Astro throughout his ordeal, talking to him to keep him calm. A helicopter was also called but couldn’t assist as Astro was stuck so deep in the mud that it was impossible to tie a rope around him to lift him to safety.

The rescue team struggled to free Astro, and Nicole began to fear the worst as the tide approached. The team tried to dig out the horse, but the ground, which had become like quicksand, was too soft.

Then, a farmer arrived at the scene on his tractor and a last ditch attempt was made to free the horse using a rope attached to his vehicle.

That’s when the miracle occurred — Nicole, the rescue workers and the farmer managed to free Astro from the mud.

Check out the dramatic rescue here:

Nicole has 10 horses and regularly rides them along the beach, but this was the first time one of her horses had got stuck.

Fortunately, everything went well this time, but this story shows it doesn’t hurt to be extra careful.

Above all, this story is proof of the incredible love between a human and his or her animals and that the bond between them can make miracles really happen!

Share if you think this is an inspiring story of dedication and devotion.