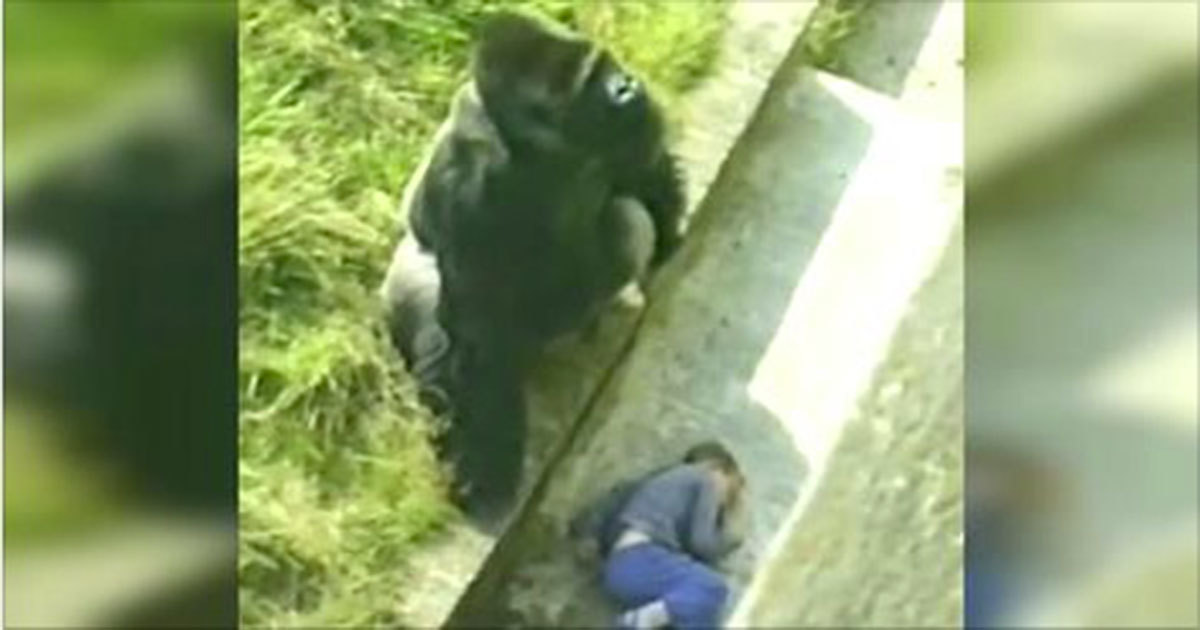 Exactly 30 years ago, in 1986, 5-year-old Levan Merritt visited to the zoo with his brothers and parents. But what was meant to be a nice day quickly turned into a nightmare that the family would recall for the rest of their lives. The day started off nicely. They walked around and enjoyed seeing all the animals. It was now time to visit the large, imposing gorillas. Because little Levan was too small to peer over and see the gorillas properly, he decided to climb the fence to get a better view. Just as he attempted to peek down at the powerful gorillas, he lost his footing and fell six meters into the animal enclosure. The Merritt family and other visitors who’d witnessed the fall screamed in panic and terror. Levan lay lifeless on the concrete ground, while large gorilla Jambo approached the unconscious boy… That’s when the miracle occurred, which continues to fascinate people to this day.

Levan (in blue) found himself face to face with one of the most powerful animals in the jungle.

His 6-meter fall onto hard concrete rendered him unconscious in the gorilla enclosure. The worst was feared as one of the gorillas, Jambo, walked up to the boy.

But instead of harming the boy, Jambo began patting him gently. It soon became clear that Jambo had every intention of protecting Levan – including against the other gorillas in his enclosure.

Fortunately, the boy was soon brought out of the enclosure. What could have ended in a tragedy gave the family much perspective. Since that day, Levan grew up loving animals and has kept in touch with the Durrell Wildlife Park, where the incident occurred, over the years. He even used the incredible story to impress his girlfriend, Amanda, now his wife. Here’s Levan and his family today.

Things could have ended quite differently for Levan on that day. Now he is raising his children to have the deepest respect for animals and wildlife. He also plans to take them to the zoo to watch the Jambo’s offspring one day – making sure, of course, that no one falls into their enclosure 🙂

Jambo died in 1992, but he is and will always be remembered as a hero. He fathered 15 baby gorillas in his lifetime and an honorary statue in his memory remains at the zoo until today. Levan was there when it was unveiled.

Take a look at the video below to watch the dramatic incident from 1986 unfold:

What a story! Personally, I’m not surprised that the gorilla protected the little boy. These animals are incredibly intelligent and they are also kind. I don’t think Jambo would have hurt this little boy! Please share this incredible story with your friends if you agree Jambo is one wonderful ‘gentle giant’. strong>

Newsner loves animals and believes in treating them with utmost respect. Please like if you do, too!