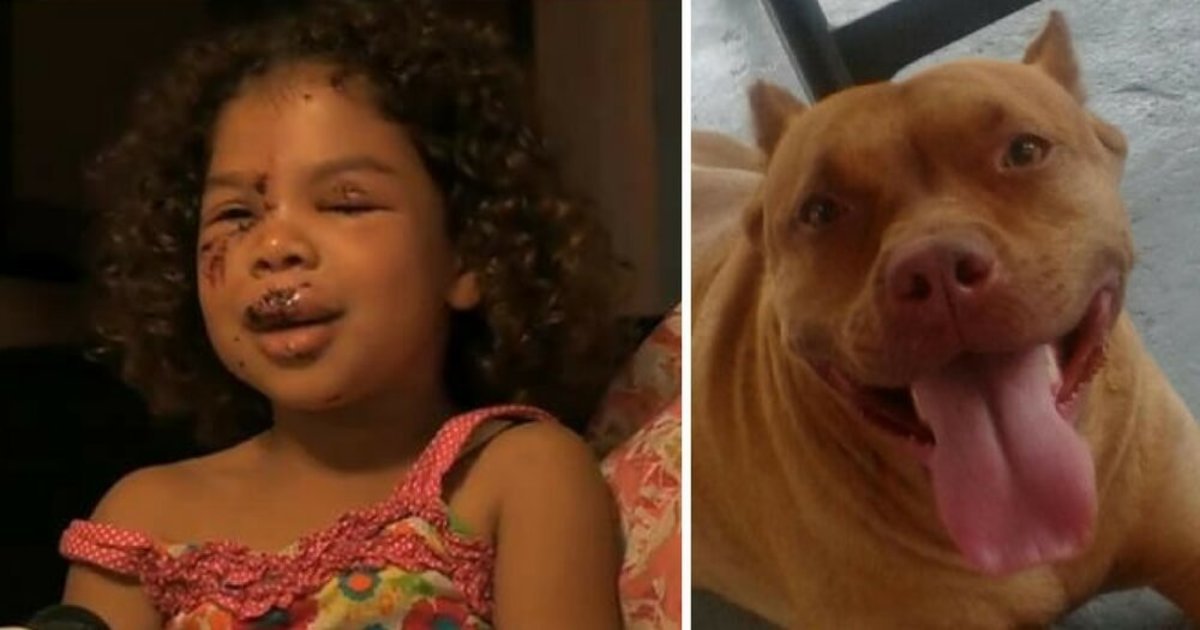 Pit bulls are known to be aggressive and dangerous, this can be very true – that is if you treat them the wrong way. The same goes for most dog breeds, it all comes down to how well the owner raises their pet by making sure they feel safe.

No dog is born evil, everything is determined the way they are raised by their owner.

Maybe not everyone can agree on pit bulls, but I am sure everyone will agree that this pit bull is a real hero.

Five-year-old Remayah Hernandez was out riding her bicycle with her sister, when she suddenly stumbled upon Tank, the neighbor’s labrador.

Being the little dog lover she is, the little girl did not think twice about trying to catch its attention. All she wanted was to pet it. Instead the day ended in blood and tears.

The dog instantly attacked the girl by biting her right in the face.

Remayah, clearly terrified, started shouting for help. Her screams didn’t just get her mother to react but also their family dog – Trigger the pit bull. He was out in the family back garden and suddenly appeared to defy everything he had been taught as a puppy.

This meant having to leave the family back garden and jumping over the fence to attack another dog. Trigger ran to his 5-year-old owners rescue when he heard her cry for help and attacked Tank who ended being injured.

The animal control at the Police station took Tank in and eventually had to put him down. The little girl was taken by ambulance to the hospital where she was treated for her injuries.

The family had saved money for a trip to go to Disney World – but instead had to use the money to pay for the costs of plastic surgery which their little daughter needed due to medical reasons after the attack by the neighbor’s dog.

That is when an online campaign was created where people were able to send the family money. The goal was to make sure Remayah would still be able to go to Disney World – and so she did! 1000 dollars were eventually raised to make this little girl’s wish come true.

The attack obviously left the little girl petrified, but more than anything, she was grateful for what her hero had done for her. Or as she now likes to call him – ”superhero”. In her time of need Trigger was really there for her.

The neighbor was at work that day, and it is still unclear how the labrador managed to escape onto the street to roam around freely in the neighborhood. When he was told what had happened, the neighbor was shocked, and instantly thought that surely there was a missing part to the whole story.

He truly felt that his dog was innocent, but was happy to hear the little girl next door was ok during the circumstances.

Everyone was grateful that Remayah had a speedy recovery following that horrible incident.

Share if you think dog owners should keep an eye on their pets!