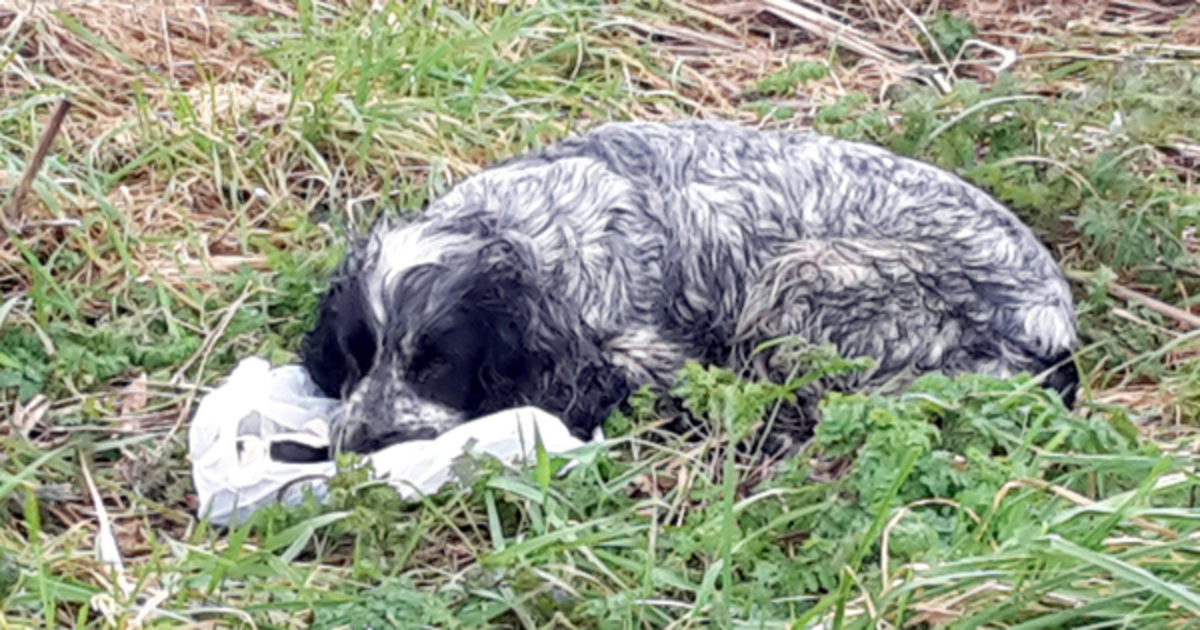 This story made my heart burst! Although it’s incredibly sad, it also carries an important message. If you know anyone who does not believe that animals have feelings – please share this story with them. It may help change their mind.

The incident, which took place in Lincolnshire, England, certainly proves that animals can feel just as strongly about their loved ones as we humans can.

It all started when Paul Skinner noticed something gray in a ditch as he was cycling with a friend. At first, he thought it was a dead bird. But as he approached, he saw it moved and soon enough, he realized it was an abandoned dog.

The dog was leaning over a plastic “Fish and Chips” bag which. He was licking and sniffing at it. Paul stopped his bike and approached the dog. He looked around to see if there were any people in the vicinity, but the dog was alone. There was only the lonely dog and the bag.

Eventually Paul leaned over the bag to see what was inside.

“The bag contained four dead pups. It was heartbreaking. She had tears in her eyes. I could not believe anybody could be so devoid of humanity to do something like this,” Paul told the English Metro.

Paul contacted both the police who were soon in touch with animal welfare groups and a local shelter. When they arrived on scene, they picked up the mother and tried to revive the pups. But it was too late.

The vet who examined the dog family believes that the puppies had been born the same day and had been alive. Perhaps they were even alive when placed in the bag and dumped in the ditch surgeons with the mother.

“We don’t know whether the puppies were stillborn or whether they died because of the cold,” the police said, adding: “We would like to thank the cyclist who found the dog and raised the alarm.”

The mother dog was given the name Carly and will now be taken care of in a dog home – where she will never be mistreated!

I’m glad that Carly could be saved, but really wish that the puppies had survived too. The mother dog refused to leave them, even though they were no longer alive. Her strong reaction really shows that a mother dog’s love is just as big as a human’s.

I really hope Carly has a long and happy life, and perhaps new puppies in the future!