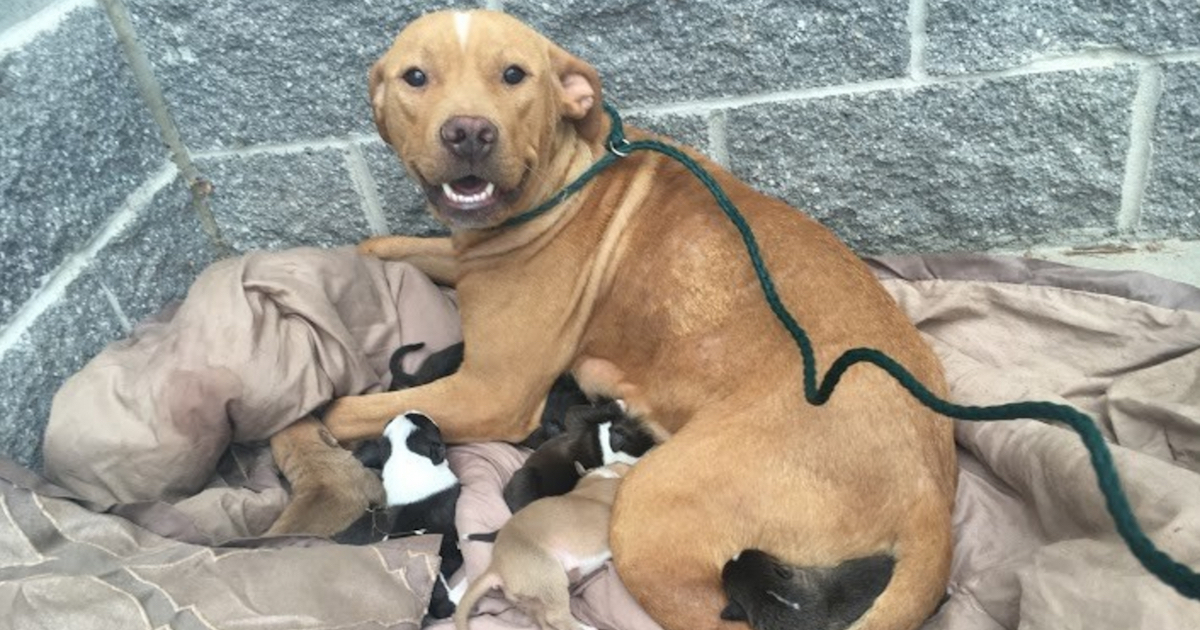 When a pit bull in Sacramento, California gave birth to 10 babies, her owner let her down at the critical moment, abandoning her just days after she delivered her babies.

The owner didn’t tie her up, so she could have walked away and fought for her own survival on the city streets. But when rescuers found her, the mother pit bull was lovingly taking care of her little ones.

Recognizing this mom’s love for her babies—and the importance of babies being with their mother—they did something special to make sure that both the mother and her these puppies have happy and healthy lives in the future.

When staffers at the Sacramento SPCA in California showed up at work one Friday in June, they came across a surprising sight. There on the shelter’s doorstep was a mother pit bull and her 10 tiny puppies, barely days old.

There was no owner in sight. And whoever left the dogs left no clues about their identity, nor any food or water for the new mother and her babies.

The mother was left untied, so she was free to walk away from her litter. But she stayed by their side, diligently fulfilling her role as a mother.

“We’re not sure how she came to be at the shelter,” Sarah Varanini, foster care coordinator at the SSPCA, told The Dodo. “Although she was still bleeding a little, there wasn’t the large amount that you would usually see from a birth, especially of 10 pups, so we are assuming that she gave birth someplace else and was dropped at the shelter shortly after.”

The shelter was happy to take in the big family, but they were also unsure how they’d be able to place such a large family together. Still, separating 10 babies from their mom would be damaging to their health and happiness.

Fortunately, a foster parent stepped forward, and he was thrilled to take on all 11 dogs.

Although the mother pit bull had been abandoned, she still trusted humans and both the SPCA staff and her foster dad describe her as “amazingly sweet.”

She even allowed the SPCA staff to handle her little ones without protest.

The family will spend the next two months with their foster dad until they’re old enough to be adopted.

Until then, their dad is enjoying his role and sharing pictures on social media.

I’m so glad that this guy was kind enough to take both mom and her babies in. I think it will make all of the difference in their young lives. All the best to these puppies and their mom!

Share if you also agree that every animal (no matter how many there are!) deserves a loving home!