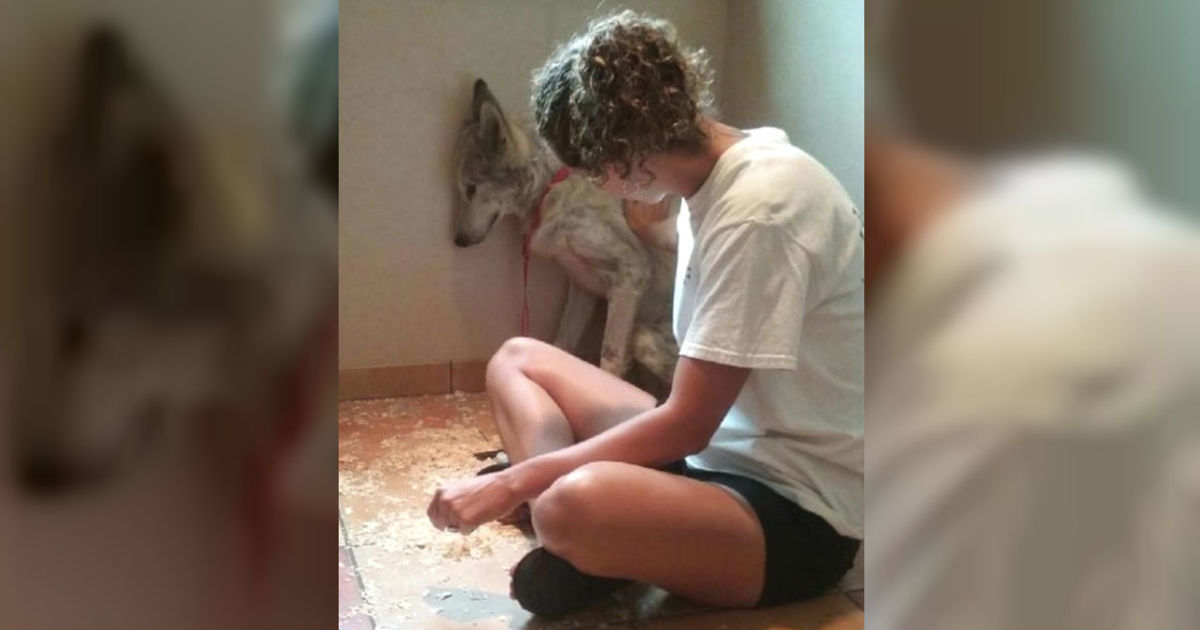 When residents of suburban Los Angeles found Castiel, they thought he was just an ordinary homeless dog, albiet one in very poor condition.

He was skinny, infested with lice, and didn’t have much fur left. So they did what any animal lovers would do and immediately called an animal welfare center.

What they didn’t know then, but would soon discover, was that Castiel wasn’t an ordinary dog.

The gray and white dog was actually a wolf hybrid. Because there are restrictions on owning wolfdogs, no one in the neighborhood could take in Castiel, who they simply called “New Boy” at the time.

Wolfdogs are often difficult to care for because they can be unpredictable. In Castiel’s case, the animal shelter explained that putting him to sleep was the only option.

But fortunately, the organization W.O.L.F. Sanctuary heard about Castiel and offered to care for the homeless wolfdog.

And this marked the start of a fantastic story about a dog who not only found a home, but also found true love and friendship.

When Castiel was found, he was wandering around a Los Angeles suburb. He had a collar around his neck, which is why people thought that he had an owner.

But his timid behavior and underweight frame moved the neighborhood to act. And they soon realized the dog needed help.

First, the dog was taken to a local shelter. There, vets discovered that Castiel was about a year old and a wolf hybrid. That meant that he needed to be placed in a special facility as soon as possible. Otherwise he’d have to be killed.

Since there aren’t any suitable places in the entire state of California, there was only one option—put Castiel to sleep.

But then W.O.L.F. Sanctuary heard his story and brought Castiel to Colorado.

When Castiel arrived, he was so scared that he didn’t dare look at his caretakers. He sat hunched in a corner and refused to move.

The team tried everything, but Castiel showed no signs of wanting any contact with humans.

Eventually, they were able to get him to stand up in a tub, so they could give him a much-needed bath.

Slowly but surely, the wolfdog began to recover. The sanctuary held a naming contest and the name “Castiel” won the day.

The name is a reference to the TV series “Supernatural,” after a character who is an angel who has been resurrected.

And it’s not difficult to see why they gave the wolfdog this name. Because soon, his transformation became a reality.

Castiel’s fur grew back, his infections disappeared, and he steadily gaining weight.

Now, it was time for Castiel to move into a large enclosure and meet some new friends.

Because Castiel had been so lonely and neglected, he was shy at first. No one knew know how he’d act in the group.

Castiel kept mostly to himself and enjoyed the tranquility of nature.

The sanctuary staff, however, saw the new member make continual progress. He became more social each day that passed.

After introducing him to several female wolves, they brought Castiel together with Tenali, a female wolfdog.

She was rescued from neglect in Wisconsin.

The 3-year-old female was both kind and energetic. And she was also very curious about Castiel.

The couple began spending more and more time together.

Michelle Proulx, Manager at W.O.L.F. Sanctuary, explains, “After a couple of days, he started to realize that she wasn’t going to hurt him.”

Just like us humans, it took a while—and that special someone—for Castiel to open his heart and feel confident again.

The relationship with Tenali helped him heal from his traumatic past.

Now, Castiel is growing stronger every day and he seems happier and healthier than ever. Talk about happily forever after!

If you also believe that animals deserve to feel genuine friendship, please share this story on Facebook!