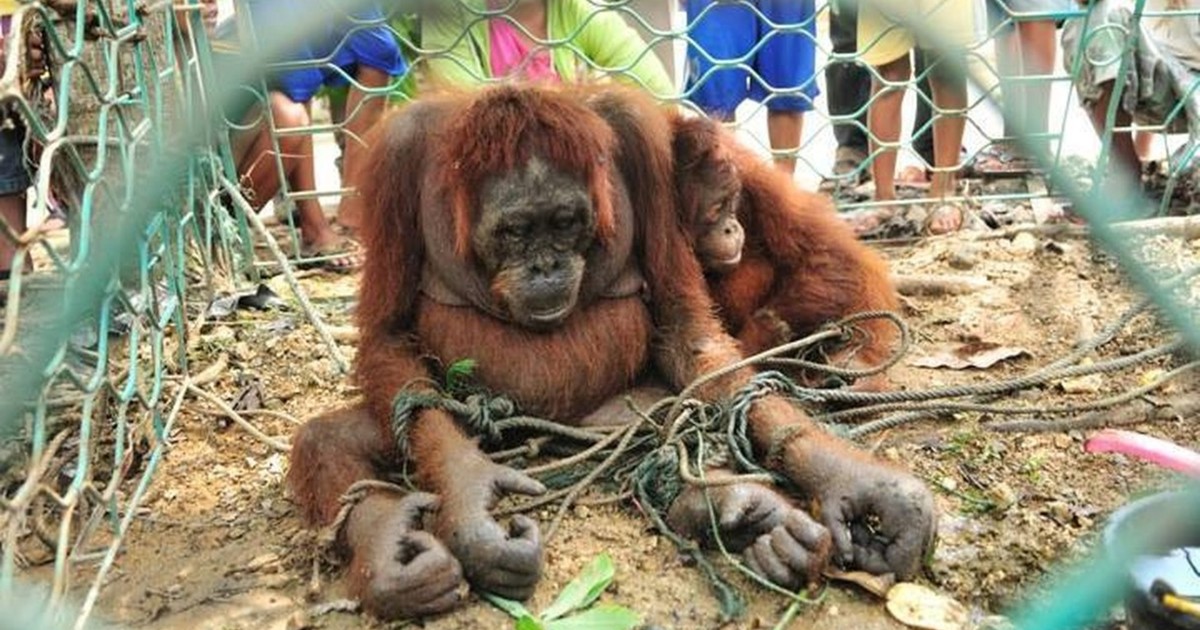 As a baby, an orangutan named Peni was forced to witness unspeakable violence and say goodbye to her one support in life. But due to the kind people would rescued her, Peni was nursed back to life and eventually got her live life the way orangutans were always meant to live it.

The forest where Peni and her mother lived that been their ancestors’ home in West Borneo for countless years, but over the past decades, it had been stripped to create palm oil trees. The devastation caused forest fires and landslides, and on a particluar day back in 2010, a landslide left Peni’s mom with no choice but to venture into a village with her baby clutching her side.

The mother orangutan was starving and weak and was only looking for a little food and shelter. But she and her baby were not given a warm welcome.

A group of villagers threw rocks and hit the mother with sticks, even though she was helpless.

Peni’s mother soon collapsed, so the villagers tied her up with ropes and tore her daughter away from her. When the mother orangutan protested, the villagers held her head in a pool of water until she passed out.

“She was still alive but could barely sit up,” IAR said. “As she no longer posed any threat to the villagers, they dragged the infant by the rope attached to her foot and tossed her into the cage with her dying mother. A large crowd of people gathered around the cage and took amusement in their suffering. The mother used what strength she had left to wrap her arms around her terrified baby while her infant desperately tried to chew through the ropes still tied to her mother’s arms and legs.”

Fortunately an IAR veterinarian happened upon the scene. The brave woman managed to rescue the two orangutans, and although she treated the elder orangutan as best she could, the vet was unable to save her from her wounds and the water in her lungs.

The fate of Peni’s mother is not uncommon in areas affected by palm oil production. Orangutans have lost 80 percent of their habitat due to deforestation, and they’ve lost 50 percent of their population, as well.

Orangutans are shot or die in wildfires caused by deforestation, and mothers are also killed so their babies can be sold as pets.

Fortunately the IAR vet was there and wouldn’t let that happened to Peni. Instead, the organization cared for Peni at their rescue center, where she spent the next four years learning to be a grownup orangutan.

Then in 2013, Peni was released into the wild to hopefully live out the life that her mother never could.

At the time of Peni’s release, IAR wrote, “After such a tragic start to her life, everyone involved in Peni’s rescue, rehabilitation and release is hopeful that she has a long and happy life ahead of her.”

Now she’s living in the wild with two of her orangutan friends who also used to live at the orphanage. She’s monitored daily by her former caretakers.