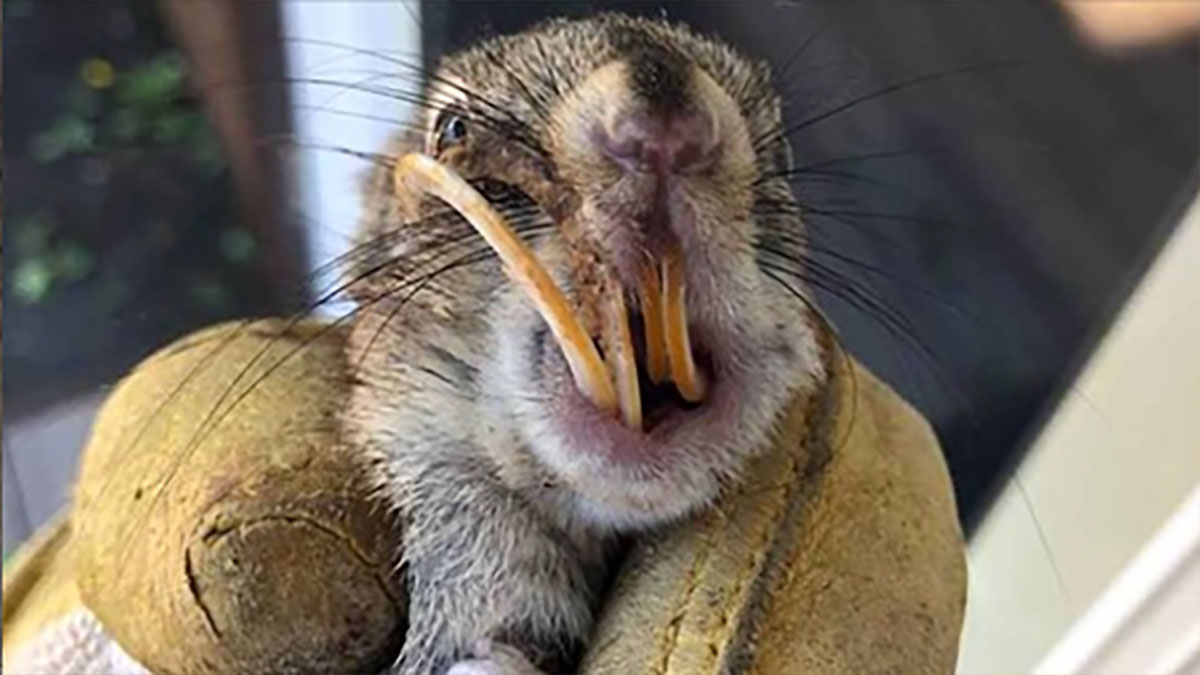 Living on a ranch in rural Alberta, Canada, Jannet Talbott may be far away from people but is never alone as she is always surrounded by animals.

The animal lover is used to the many animals, both domestic and wild, who live on her ranch and looks out for them all.

One day she was watching a squirrel enjoying a snack from her bird feeder when she noticed something unusual on his face.

“I could see there was something on the side of his face,” Talbott told The Dodo. “I got closer and thought, ‘Oh my gosh, that’s a massive tooth growing out of his mouth.’”

Squirrels have four front teeth that never stop growing but their constant gnawing on nuts and seeds ensure most squirrels’ teeth are kept short. Somehow this had not happened with this squirrel and Jannet knew he was in danger.

The tooth was growing toward the squirrel’s eye and Jannet suspected he was living on powdered bird food as he couldn’t chew on anything.

Now she had the difficult task of trying to catch Bucky, as she named him, so she could give him the help he needed.

“One day, I saw him in the feeder. It was like divine intervention. I just had to reach in and grab him,” she said. “Once I had him in my hand, I just kept telling him, ‘I’m going to help you, Bucky. You’re going to be OK.’”

When Jannet had the canine challenged squirrel in her hands she saw that it wasn’t just one tooth that was an issue.

“His mouth was an absolute mess. His upper incisors were curled around and growing inside his mouth,” she said. “When he ate, his teeth were rubbing on his face. He was so horrific.”

She worried that if she took Bucky to a vet they may not be able to do anything for him and the journey would stress him out too much so she grabbed her cuticle trimmers and attempted the job herself.

After watching some instructional videos on YouTube, Jannet swaddled Bucky and covered his eyes; he instantly became calm which was lucky for this talented rancher as the job took ten minutes.

Squirrels have no feeling in their teeth and even after she had finished trimming, the squirrel was in “no hurry to get away,” Jannet said, as per CBC Canada.

“I took him outside, and he ran to a branch and started rubbing his little cheeks. It was like he couldn’t believe those teeth were gone. He just kept rubbing his face,” she said.

“The next day, I saw him back in the feeder — and he had the most amazing little squirrel smile on his face. He was just so happy.”

Now Jannet hopes to inspire others to help a needy animal.

“I really feel a deep connection to animals, and they always seem to come to me when they need help,” she added.

“I’m always happy to help them, and I think if we all did a little, it would end up being a lot.”

I cannot imagine how nervous Jannet must have been attempting dentistry on this creature in distress but thank goodness she did as he may have starved to death had she not been brave that day.

Help us thank this animal hero by sharing this story.