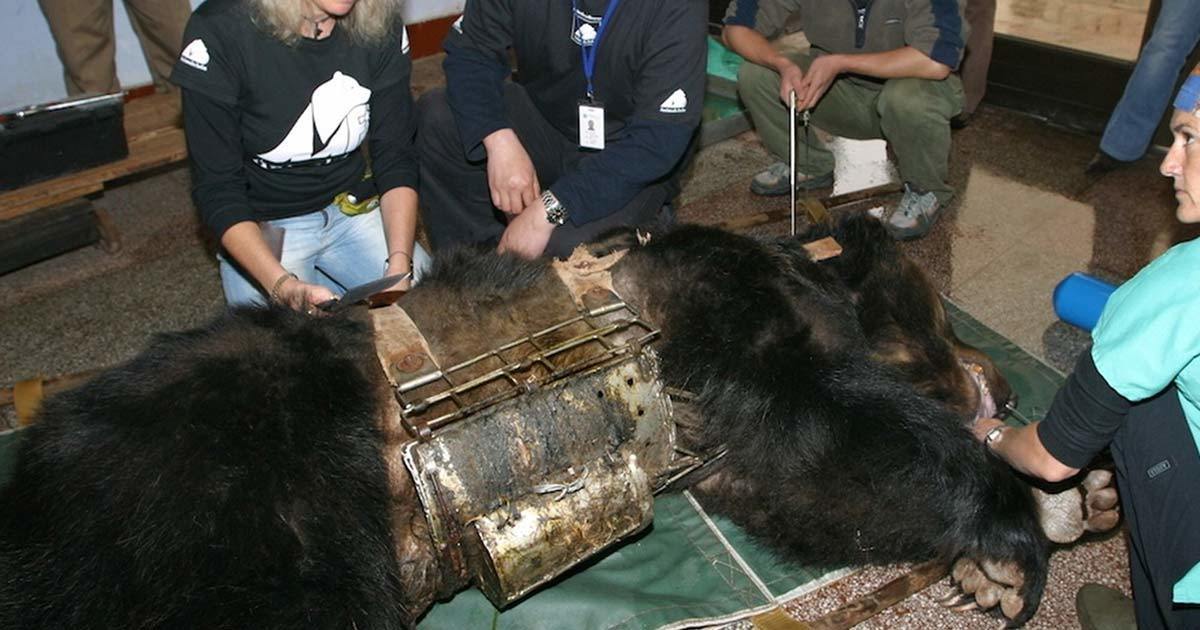 Bear Caesar spent the first part of her life in a kind of hell on earth. She lived on a farm in China that harvested ingredients for traditional Chinese medicine.

She was cruelly forced to supply the farm with bile from her gallbladder. Her captors drained her of the fluid 24 hours a day and bound her in a restrictive metal vest. She was confined to a small room where she could barely move.

But just as it appeared her life would never improve, kind-hearted animal advocates came to Caesar’s defense… and changed everything.

Like thousands of other bears in China, Caesar grew up in what could best be likened to hell on earth. She was forced to live in a small confined space and had what could only be described as a torture west strapped onto her. Even worse, Caesar had an open wound on her side. She was forced to supply them bile from her gallbladder, which they used to make traditional Chinese medicine.

Caesar suffered immensely in her terrible living conditions, and it’s incredible that she was able to survive. But amidst the darkness, without hope for an end to the torture, everything changed for Caesar in 2004 when she was one of several lucky bears rescued by Animals Asia.

By this time, she was frustrated, miserable, and seriously wounded. But thanks to Animals Asia, she was finally able to break free of the awful vest and get the love and care she needed and deserved.

“Caesar’s scars have all but disappeared and today she is an astonishingly beautiful (and formidable) bear. Weighing in at a humongous 271 kgs [598 lbs], Caesar is all muscle and all woman!”

Her favorite activities include swimming and sunbathing, as well as digging—especially when the weather’s nice and cool in the fall.

Although Caesar’s story had a happy ending, it’s important to remember how much work still needs to be done to end animal torture. In China, there are an estimated 10,000 bears locked up. Hopefully, Caesar’s story will serve as a wake-up call so that animal lovers the world over will band together and help put a stop to this.

No animal deserves to be treated this way. Consider supporting the work that Animals Asia by making a donation. And please share this story to help spread awareness about the plight of Chinese bears.