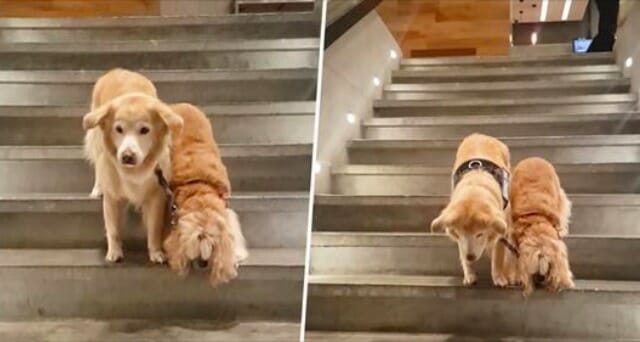 Dogs are simply amazing animals, and their title of ‘man’s best friend’ couldn’t be more appropriate.

After seeing this story, however, another title might also be due: ‘dog’s best friend’.

A Cavalier King Charles spaniel named Kimchi was discovered one day in dire shape. She was thin, mangy, weak, and had flea-infested matted fur — and, to make all matters worse, she was blind.

Kimchi was brought to an animal shelter. Then, one day, couple Erik and Thea visited the animal rescue shelter one day alongside their 13-year-old golden retriever mix, Ginger, seeking to expand their family.

That’s when an incredible bond would begin.

At first, Ginger wouldn’t have it. None of the dogs at the shelter seemed to please her.

“Ginger rejected all the other dogs, until we came across Kimchi,” Thea said.

Ginger appeared to feel immediately drawn to Kimchi, and the two seemed to form an immediate bond. For Erik and Thea, it was an easy decision.

They brought Kimchi home, but never could have expected what would unfold within the next days and months.

It began when Thea initially had the idea to leash the two dogs together so that Kimchi wouldn’t wander off. But gradually Ginger begun to take her own initiative, naturally leading Kimchi around and being by her side, waiting patiently to see if she needed help.

In other words, Ginger took Kimchi under her wings, guiding her lovingly wherever she went.

Ginger and Kimchi had fun at the pet event of Robinson's Magnolia today.

The two are now the best of friends and inseparable.

Just watch as Ginger helps Kimchi down a flight of steep steps in the video below, as the pair leave a hotel together in Quezon City, Philippines. Just look at the love and trust these two have developed!

How sweet is this friendship? Isn’t that what friends are for after all? Share if this warmed your heart, too!