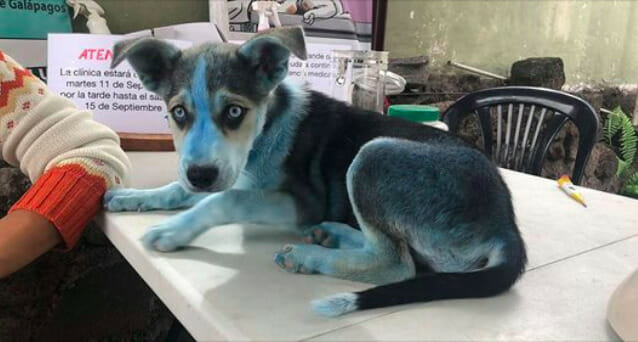 Animals are adorable — but can also be clumsy at times! Sometimes that clumsiness gives us a good chuckle — but other times it could be terrifying and even life-threatening for our pets.

A dog owner brought her 5-year-old dog, Taylor, to a vet clinic one day in the Galapagos Islands — after it had consumed it paint.

When the veterinary clinic staff saw the very odd looking husky, they were naturally stunned.

“A volunteer came in with a weird face, saying that there was a blue puppy outside,” Zoe Hawthorne-Loizeaux from Darwin Animal Doctors, the group that runs the clinic, wrote on Facebook. “The vets didn’t really know what she meant… A puppy with a blue tongue? Blue eyes? A new kind of dog maybe? So they all went out to actually see in front of them a puppy… painted blue.”

Depressed and Not Eating

Funny enough, the owner was not bringing Taylor in because she was, well, blue. It was, rather, because Taylor hadn’t been eating and had appeared depressed over the past few days.

“Taylor was apparently playing with a bag of blue paint mix before her owner found her completely blue and throwing up paint,” Tod Emko, president of Darwin Animal Doctors, told The Dodo.

The veterinarians at the clinic immediately understood that the blue paint and Taylor’s condition were, of course, related.

Although the pup’s name was Taylor, the staff couldn’t help but give the adorable husky a nickname: Smurf.

While it’s perhaps hard not to see “Smurf’s” little accident as a bit amusing and sweet, paint is unfortunately a toxic substance, and the situation was therefore, above all, alarming.

“Smurf came to us two days after the blue paint incident, which was a bit concerning because she had been throwing up blue paint for those two days,” Tod added.

The vet team were very concerned about the pup’s health and whether she would be ok.

Thankfully, there was a relatively easy solution to Smurf’s predicament. After examining the pup, they sent her back home with her owner and some crucial medication. They advised Smurf’s owner to wash her carefully and thoroughly with dog shampoo to wash the paint out.

“Smurf’s human family washed her several times with dog shampoo,” Tod said. “However, although it’s most people’s instinct to scrub off the paint, we advised the owner not to — only to wash her gently and give her as many showers as it would take to get it all off, until she looks like a husky again.”

The outcome of their advice was just wonderful!

Look at Smurf now — or perhaps we should now go back to calling her Taylor!

“She passed her physical exam with flying blue colors, the staff all started taking pictures of the miracle baby,” Tod said.

What a brave champ Taylor is!

I’m so glad Taylor had a speedy recovery! Pet’s behavior can appear cute or funny at times, but it’s important to remember to take their health concerns very seriously. Without those medications and proper advice, who knows how things could have turned out for Taylor.

Share this story to thank the amazing staff at the vet clinic for their wonderful work.