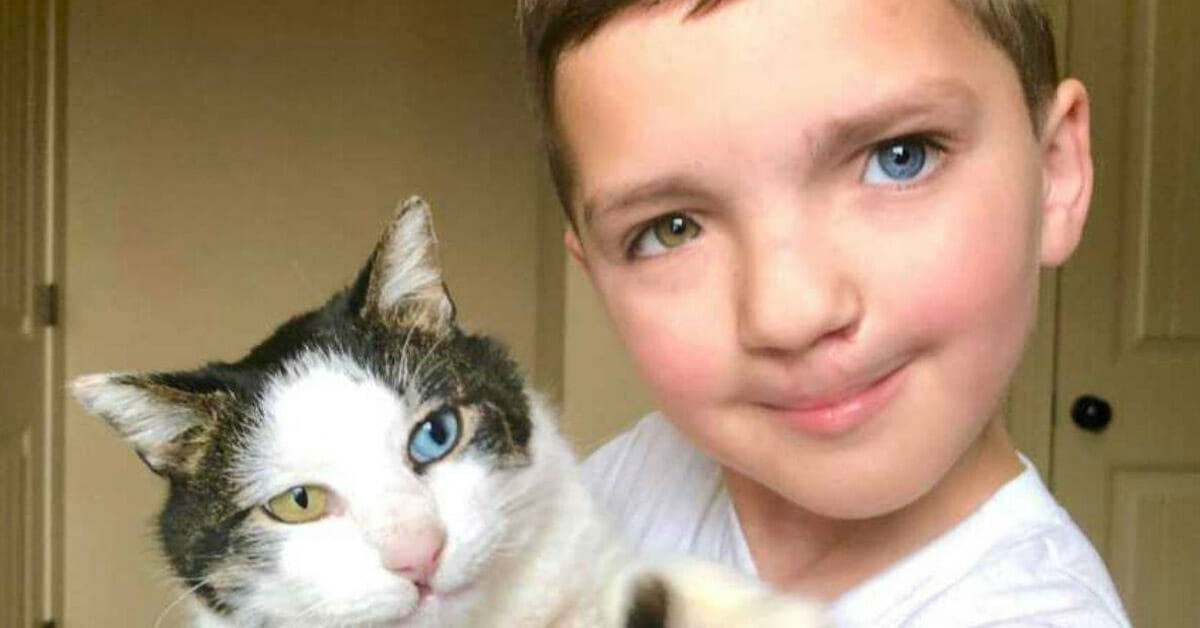 Being different from everyone else can be a difficult thing, especially when you’re young. At a certain age, simply not looking like the rest of your classmates can unfortunately result in ridicule and bullying.

Madden Humphreys is an ordinary 8-year-old from Oklahoma, USA. The only difference between him and the average boy of his age is the fact that he was born with a cleft palate and two different colored eyes.

Although the palate was operated on at birth, his unusual appearance often resulted in him being bullied at school.

Can't believe these little guys are mine <3 🙂

Fortunately, Madden is a strong little trooper and didn’t falter in the face of adversity, even though he took the comments to heart.

Madden’s mother, Christian Humphreys, soon joined a Facebook group where parents of children with cleft palates could discuss issues such as how to cope if their children were feeling down or depressed.

When Christina saw the picture of the cat, she knew that Madden had to meet his “twin cat”.

The problem was that the cat lived over 150 miles away, and the family didn’t have the money to pay for a trip. It didn’t take long before friends, family and strangers began to band together in a bid to help Christina fulfil her dream for Madden.

In just a few days, they had raised enough money to go to Minnesota and adopt the cat Madden would go on to call Moon.

Right from the off, it was apparent that Madden and Moon shared a special bond.

It’s almost as though they were destined to meet.

“We drove from Oklahoma to Minnesota this weekend, to get the kitty Madden has named Moon. We had quite a few incredibly generous, friends and strangers help make the road trip possible, so that we could adopt this sweet fur baby and we are so thankful!

In case you missed it, these handsome boys were both born with cleft lips and complete heterochromia iridum (different colored eyes), and we knew they were destined to be best friends. Funny how a pet can make you feel less alone.”

We drove from Oklahoma to Minnesota this weekend, to get the kitty Madden has named Moon. We had quite a few incredibly…

Moon certainly looks like a cute cat! We hope it’s not long before he’s acclimatised and comfortable playing more often.

It really is amazing that Madden and Moon met one another. Here’s to hoping the pair are happy being companions moving forward.