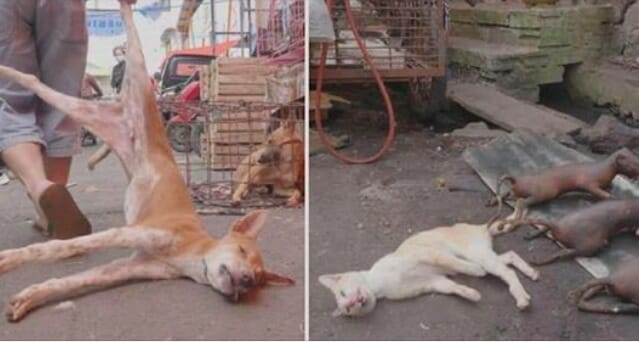 Animal rights activists are accusing the Indonesian government of failing to honor its promise to ban cruel dog and cat meat markets.

Images from the activists reveal the terrible conditions in the meat markets, where animals are beaten and even burned alive.

WARNING: This post contains images that may be disturbing to some readers.

The launched Dog Meat-Free Indonesia (DMFI) campaign notes that a brutal meat trade continued at the so-called ‘extreme market’ in Tomohon City, despite the government’s promise to ban it in August.

“It was the most horrific cruelty we have witnessed so far in our campaign to shut down this hideous trade, and it was all done in full view of very young children,” says Lola Webber, director of the Change for Animals foundation.

“Every single dog and cat we saw at Tomohon extreme market was blow-torched whilst clearly still alive,” she adds.

In Indonesia, thousands of dogs are killed every day for their meat. Enough is enough. Join me and @HSIGlobal for the #DogMeatFreeIndonesia campaign to urge President Joko Widodo to end the dog meat trade https://t.co/AwBjtClOcP pic.twitter.com/MXBrp0ds8h

Images captured by ABC confirm these claims. They reveal dogs and cats being burnt alive. Locals, tourists and children wander through the busy streets of the market.

“By the end of our filming we were all spattered with blood and brain matter from the bludgeoning,” Lola told The Sun, adding that this shows “how easy it would be for customers and tourists to become infected with diseases such as rabies and two of our team were extremely sick following the market visit.”

As part of the Dog Meat-Free Indonesia coalition, HSI is expanding our end dog meat campaign to have an even greater impact in Indonesia where gruesome scenes like this can be seen every day. Please, sign to urge President Joko Widodo to ban this cruelty: https://t.co/b9HS6m75D0 pic.twitter.com/LEBWaSCfhy

“We are really grateful that the horrific cruelty and human-health risks of this appalling trade has been publicly recognized by the Indonesian government, but our latest evidence clearly shows the need for an immediate ban cannot be ignored.”

The brutal meat trade has made headlines in the country and around the world. More than 940,000 people have signed the DMFI coalition petition and 90 celebrities, including Cameron Diaz and Ellen Degeneres, are supporting the animal rights campaigners’ bans.

In addition to their obvious animal cruelty, markets of this kind are also dangerous for humans.

“As long as the dog and cat meat markets in North Sulawesi continue to drive the illegal trans-provincial trade into densely-populated cities, any attempts by Indonesia to secure its rabies-free status will fail,” says Dr. Katherine Polak of DMFI.

“Millions of Indonesian citizens and global tourists could be at risk of exposure to diseases.

Cruel meat markets are obviously ridden with animal cruelty, and are also harmful to humans. Hopefully, the Government of Indonesia will live up to its word — sooner than later.

Share this post to bring awareness to this existing atrocity, and support animal rights activists’ campaigns with your signature.