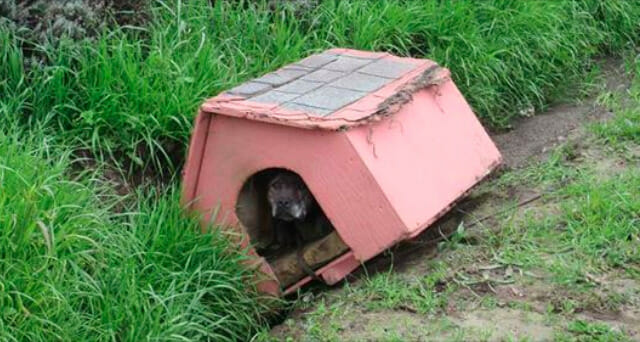 In mid-February, a driver was on the road in California, USA when he suddenly spotted something unusual.

A strange, pink-colored object was laying in a ditch on the roadside, writes The Dodo.

He decided to stop his car to investigate further. But when he approached the object, he was completely stunned.

There, right on the side of the road amidst California’s stunning landscape, lay a wooden object. The structure’s distinctive pink color had immediately caught the driver’s eye.

As he stopped his car and stepped out, he began to see that it was a small house. But it was too small to be a children’s playhouse, and too big to be a dollhouse…

It was then that the driver began to realize what it was: a dog house.

The driver cautiously peered inside — and to his shock, there sat a poor dog.

The witness immediately phoned police who soon arrived on scene. The abandoned dog with incredibly sad eyes was taken to the Santa Cruz County Animal Shelter (SCCAS), where she was treated and cared for.

Staff at the shelter would later learn that the dog was 9-year-old Pebbles.

Meanwhile, the police launched an investigation to find out how Pebbles had come to be abandoned like that. They eventually managed to locate Pebble’s owner, who explained he had become homeless and was sadly forced to leave his dog behind. It’s unclear what happens to the owner, but what’s certain is that both he and his dog met a tragic fate.

“I met Pebbles and she is the sweetest dog with beautiful soulful eyes,” a woman wrote on the shelter’s Facebook page.

I really hope Pebbles gets a new and loving home soon! Please SHARE to help spread the word on this sweet dog in need! All dogs deserve a second chance in life. ❤️