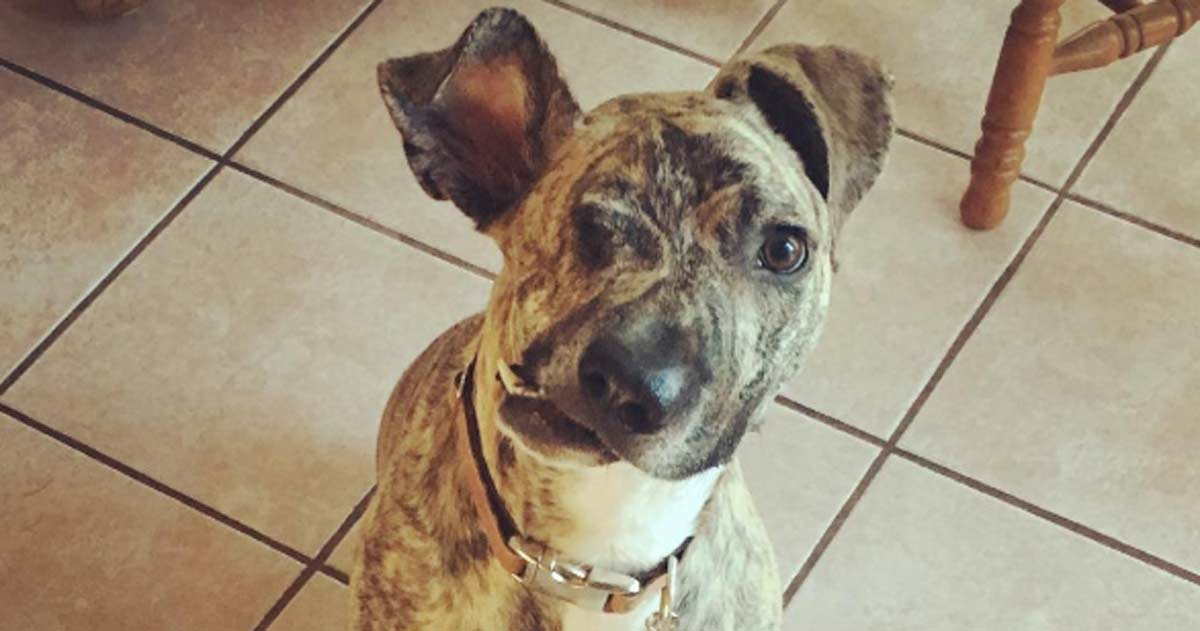 When a 4-month-old puppy was left at the Cuyahoga Country Animal Shelter in Ohio, USA, in April 2016, he was so ill that he couldn’t even open his mouth to eat. Nevertheless, he remained in high spirits; his tail continuously wagged, and he was ready to give everyone kisses.

Veterinarians examined him and surmised that he’d contracted a severe infection from a dog bite. The infection had caused a deformation of his face, and so they administered antibiotics in the hope of restoring his health.

Sadly, nothing worked. The dog – named Squish – became weaker and weaker through the fact that he couldn’t eat properly. It got so bad that a date was set for him to be euthanized. The vets thought it was kinder if he didn’t suffer.

Squish’s future was far from bright. At the same time, those caring for him didn’t want to give up on a puppy that harbored so much love and affection.

Baby boy can't have hard kibble for one week. This is his “hurry up Mom” face when waiting for his food to soften with water. #firstworlddogproblems #hethinksimstarvinghim #hisimpatientface #sittingpretty

They decided to send him to a specialist for X-rays prior to his euthanization. It was there that scans uncovered something they didn’t think possible.

At first, it had been assumed the dog’s facial deformations were due to an infection brought about by a dog bite, but this wasn’t the case. It turned out he’d sustained significant fractures to his skull and upper right jaw. The scar tissue had prevented his jaw from growing along with the rest of his body, making it extremely difficult for him to open his mouth.

The only thing to be done for Squish was extensive surgery. Sadly, there was no one ready to pay for it, and no one to adopt him because he was so sick.

With Squish’s fate looking bleaker and bleaker, veterinarian Danielle Boyd finished her internship at the Cuyahoga County Animal Shelter and decided to take the dog home for the night. She thought it would be nice for Squish to have one night where he wasn’t alone in a cage.

When Danielle got Squish home, he was a completely new dog. Danielle wondered how a creature who had experienced such pain in his short life was able to trust people, and yet there it was … he did.

Squish fell asleep in Danielle’s arms, and by the time they woke in the morning she just knew she couldn’t let him be euthanized.

What’s more, it wasn’t just Danielle who fell for Squish’s charm. Eileen Heldmann, the vet who had initially assessed the dog, also wanted to save him. So she operated on him the next day.

#tbt to the very first time I took Squish home from the shelter to see how he would do. Needless to say this was the first trip of hundreds he would take with me ❤. His face kills me in this photo. #firstcarride #hewentcrazyafterthispic #hehasaseatbeltnow

The operation was a complete success, and it enabled Squish to eat again. A tooth was removed, along with an eye and part of Squish’s jaw, but afterward they were left with one happy dog.

“I cried seeing his excitement as he picked up a tennis ball for the first time, and that was only the beginning of his little victories,” Danielle told The Dodo.

A good friend will tell you when you have something on your face. Your best friend will lick it off ❤️. #bestfriendgoals #bromance #squeasel #sneakattack @thespottedweasel

Fate brought them together

He loves to play, collect balls and cuddle with Danielle, of course.

It would later transpire that Danielle had lost her own dog just two days before meeting Squish. One could say that fate brought the two of them together … they needed each other!

#tbt I have been looking at all of Squish's first birthday pictures from last March in preparation for his new brother's first birthday. Squish has grown in many ways this past year that I have been lucky enough to call him my own. He never ceases to amaze me or bring a smile to my face. I too have grown tremendously because of him. He has inspired me in ways I never imagined and filled a void in my heart I thought would never be touched again after losing rescue pups over the years. For those of you that have rescue animals, support rescues, or give any animal (rescued or not) a loving home, I want to say a huge thank you. For those of you considering a rescue animal, please do so if you can take on the responsibilities. I promise, they will be the ones rescuing you ❤#adoptdontshop #throwbackthursday

I’m so happy Squish’s story ended in happiness. Every good soul deserves a second chance, and it warms the heart to know that Squish will be in a safe and loving home.