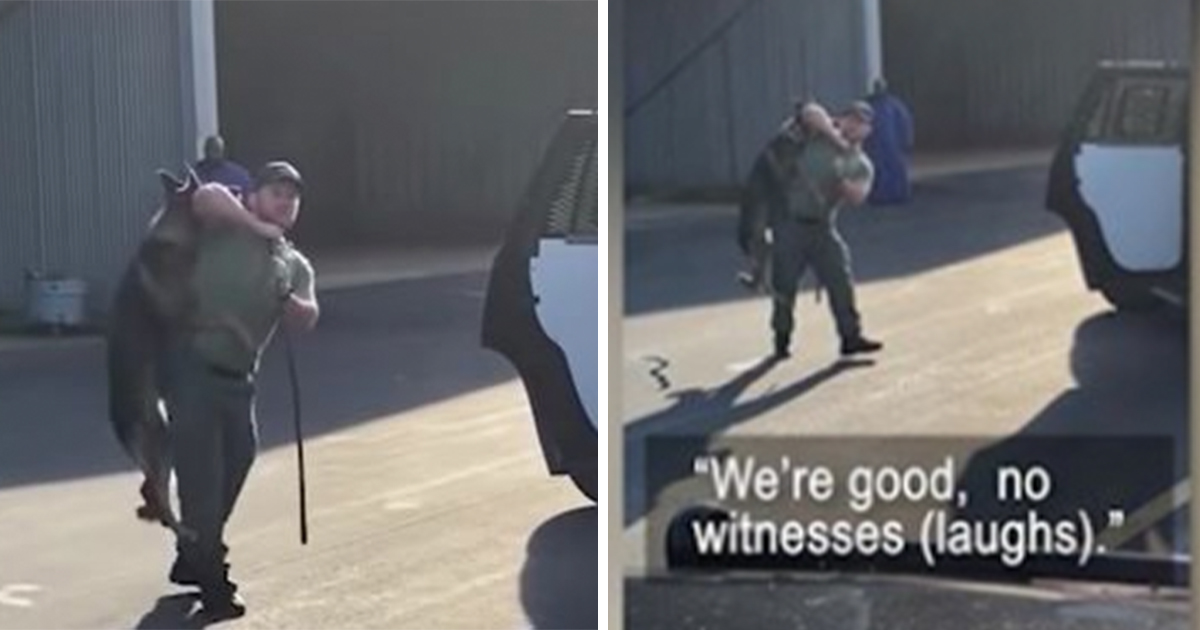 Disturbing video has emerged which appears to show a North Carolina K-9 handler swinging his dog over his shoulder before slamming him into the car.

The officer, whose name has not been released, apparently then appears to hit the dog. Another officer is heard saying, “We’re good … no witnesses.”

The video, which was first published by Fox 46, showed the officer apparently scolding the dog for exiting the police cruiser.

In the nearly minute-long video the dog, since identified as “Zuul”, exits the car, the handler from Salisbury Police Department yells, walks up to the animal, and puts a leash on. He then picks Zuul up by the leash and puts the K-9 over his shoulder walking back to the vehicle.

In the video, you can hear the other officers ask if their cameras are on and then request they be turned off.

In a news conference Salisbury Police Chief Jerry Stokes said it was important that viewers didn’t take what they see in the video out of context.

“When a canine is non-compliant with the handler’s demands, the handler is trained to correct the dog. Canine training tactics and corrective measures can sometimes be alarming when provided out of context.”

He assured the public that the dog was not harmed and returned to his duties.

“I think this was an example of something you should not do,” Roy Taylor, a veteran K-9 handler for more than 20 years, said, as per WTNH News.

“By slinging the dog over his shoulder, carrying him back, he’s cutting off that blood supply and air for several seconds, and then by throwing him in the vehicle the way he did, he risked causing some cervical spine or cerebral spine injuries to the dog,” Taylor said.

He said besides the health of the dog, the price of the dog is another consideration.

“Sometimes it can be up to $20,000 to $25,000 and the potential damage to the dog’s training,” Taylor said. “Now going forward, the dog’s going to have to reconsider whether he gets out of the car at all.”

Zuul and the officer have been separated while an outside agency investigates, as per WTNH News.

These dogs risk their lives every day to protect our officers. I understand they have to be properly trained for the important role they do but it’s hard to believe this is part of any training.

I hope measures are taken to ensure no K-9 faces this kind of punishment again. Please share.