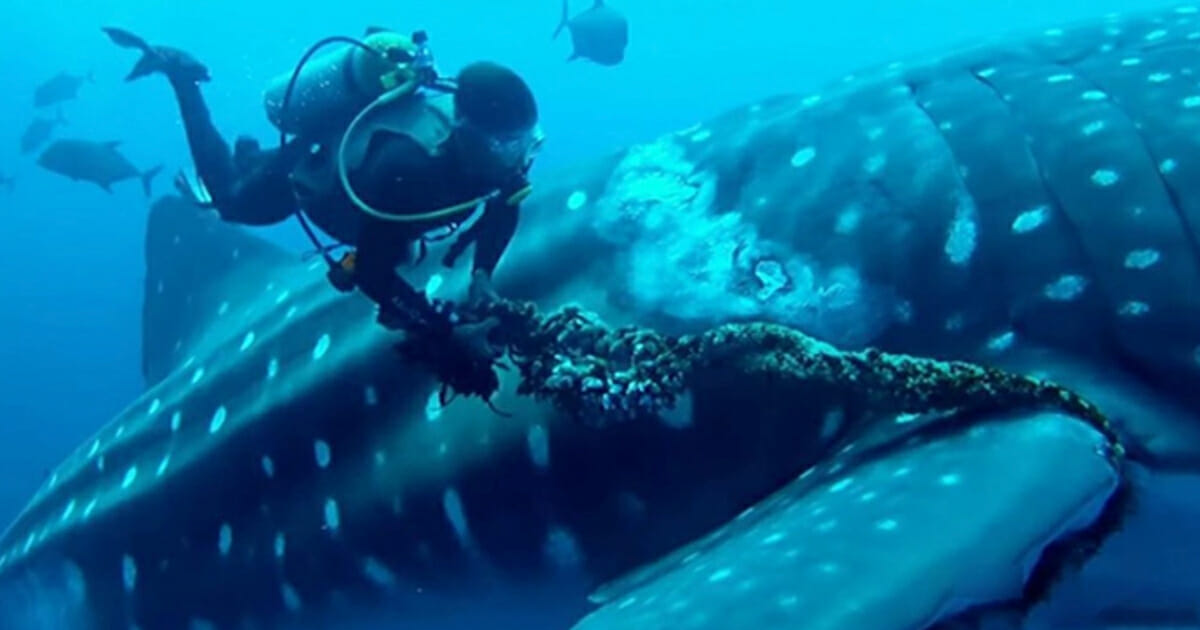 For a long time now, we’ve been aware than we need a concerted effort to improve the state of the world’s oceans.

The damage wrought by an ignorance to the negative effects that we, as humans, have had on the seas is colossal. It’s only recently that we’ve taken a big stand against pollution in the earth’s waters, and even now it remains a big problem.

Yet there are beacons of hope; stories and clips we can use to show us that we can make a difference, no matter how small our actions.

Whilst deep-sea diving around the Socorro Islands, off the west coast of Mexico, a group of divers encountered a whale shark in desperate need of their help. The shark was trapped with a commercial fishing net tied around its body, one that was biting into the shark’s skin and threatening to cause unspeakable pain if left unchecked. The divers knew there was only one thing for it, and so took a course of action that’s been praised online…

The video, uploaded to YouTube in 2016, shows a serene ocean interrupted by a gigantic whale shark entangled in a commercial fishing net. The net is wrapped around the shark’s midriff and is gradually, over the years, biting into the creature’s flesh.

The divers’ swim around the shark for a time, before one withdraws a pocket knife and descends so that he’s level with the huge fish. Then he saws at the rope, cutting it in two and easing the net off.

The best thing about it all? The shark actually slows pace and seems to allow the diver to do what’s necessary, knowing that the net needs to come off.

All in all, it takes just 30 seconds to remove a length of rope that otherwise could have eventually crippled or killed one of the ocean’s most magnificent creatures. Whale sharks are the planet’s largest species of fish, but since they’re filter feeders, they pose no threat to humans.

Who knows how long this particular shark was swimming around, trapped by the net? We can only hope that it lives a long life now, free from pollution and pain.

Watch the amazing video of the shark being freed below:

We know, right? If you enjoyed this video, hit the SHARE button to raise awareness concerning continued pollution in the world’s oceans.