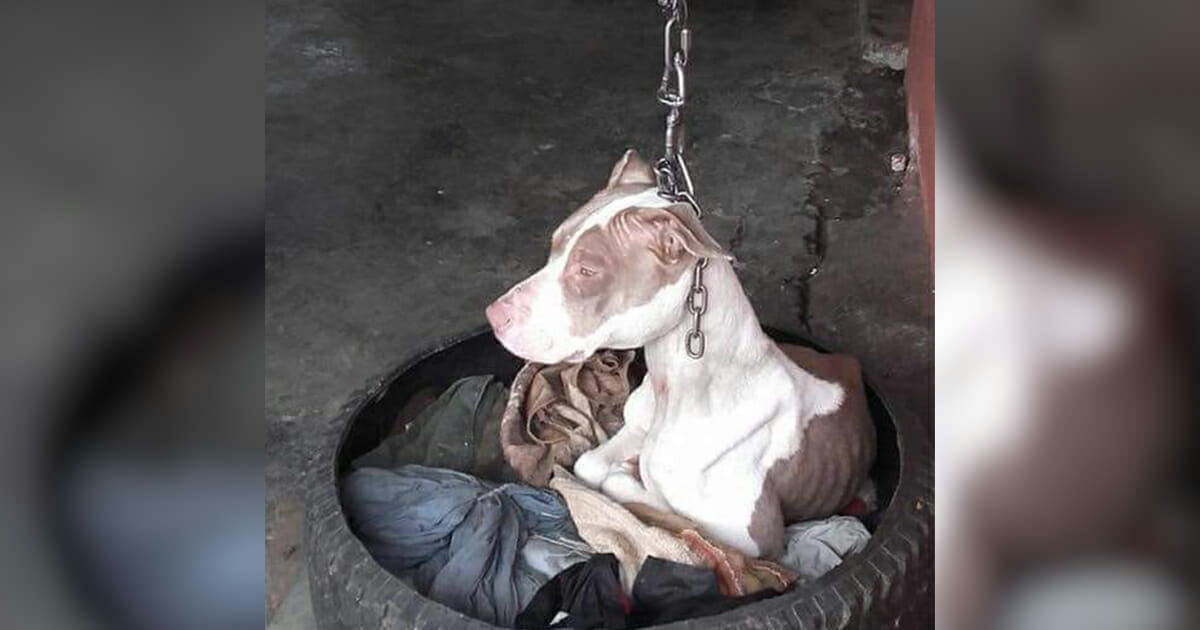 Having guard dogs is common in virtually all parts of the world. It should go without saying that most seem scary when you approach them – after all, that’s what they’re for.

But for those who came across guard dog Cala, fear wasn’t what they felt. It was more sadness, pity and frustration.

Cala sat and “guarded” a car dealership in San Jose, Costa Rica. Her owner rarely gave her food, and when she got ill she wasn’t taken to the vet.

In the end, the dog became so weak that she could no longer stand. Instead she sat and watched from an old car tyre, a short chain tied around her neck that prevented her from resting her head.

In fact, her head was literally hanging from the chain, which was slowly eating its way into her skin.

Cala’s health got worse and worse as she struggled to keep her head up. She had problems with her breathing and a lot more besides.

If no one came to rescue the poor dog, she was surely condemned to die.

Fortunately, a neighbor had noticed how bad a condition Cala was in. They contacted the police, who in turn asked local animal shelter Territorio de Zaguates if they could help.

Obviously the organization said they wanted to, but it wouldn’t be easy.

Robbed of her dignity

The sight they encountered when they first glimpsed eyes on Cala will never leave Lya Battle, founder of the Territorio de Zaguates shelter.

She told The Dodo: “I felt desperately sad and frustrated. The picture I first saw of her showed a pitiful creature robbed of its dignity and ready to give up — a dog whose spirit had been broken and was just waiting for the end to come while living a never-ending nightmare.”

Thereafter, the police and the shelter were able to take Cala away from her evil owner and to a vet. There she was cared for and treated for her injuries, which included deep wounds from where the chain had been around her neck.

After her stay with the vet, Cala moved to Territorio de Zaguates, where she stayed while she was healing, both physically and emotionally.

It took Cala a while to recover: The wounds were difficult to treat and the mental terror she had suffered left a lasting scar on her heart.

To the volunteers at the shelter it seemed that Cala hated the other dogs there. They were worried to let her mingle with them; scared it might be impossible to rehabilitate her.

One theory was that Cala had never met other dogs – some of the volunteers even reckoned she might have been trained to attack and kill other animals.

However, reluctantly, Cala began to trust other dogs over time.

She went from being sick and weak, depressed and shy, to a strong and confident soul.

“With every day that passed, we saw more of her personality come through. She went from fearing humans to trusting them and even ‘bugging’ them for attention,” Battle explained.

Still, Cala was not completely safe at the dog’s home. In June of this year, people snuck into the shelter and laid out sausages laced with poison. In total, 16 dogs died. Cala had eaten a sausage herself, but somehow survived, probably due to her size in relation to how much she ate.

She was left shaken, mind, and struggled for a time with neurological problems. Again, however, she recovered … she’s one tough cookie!

Cala survived years of neglect, torture, famine and disease. Her life was hanging by a thread when she was saved, but somehow she found the strength and will to come back.

Although many dogs never get a second chance, Cala’s recovery has inspired thousands. It certainly warms my heart!

Today, Cala is living with a foster family that give her all the love and attention she needs.

Lya Battle, meanwhile, has saved countless dogs in her life, and will strive to save a good deal more. For her, though, Cala’s story is one that she’ll never forget.

This amazing rescue is a classic example of good vs evil. In the end, as always, love triumphs over all!