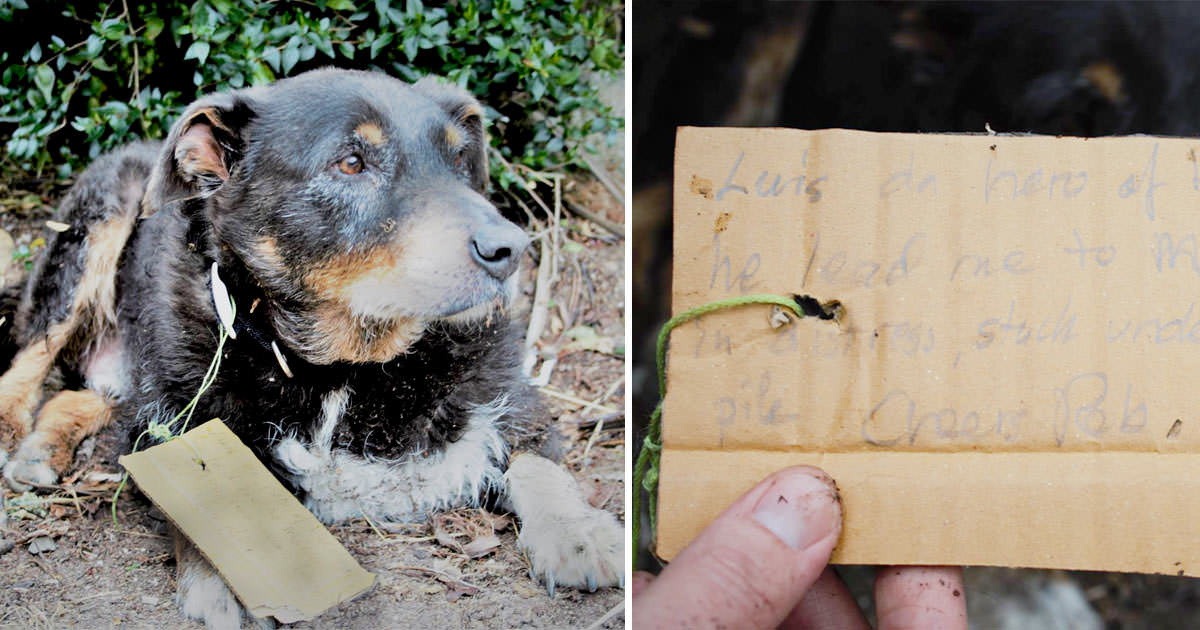 Louie the sheepdog lives with his mom and dad in New Zealand. He’s always been a curious dog and he’s gone on adventures near his family’s farm his whole life. But he had always come home when he was done.

The older Louie’s gotten, the shorter his little adventures gave become. And today, he’s 12 years old and mostly stays around the house. But recently something happened that caused Louie’s owners to worry. He disappeared.

Marolyn Diver is the daughter of Louie’s owners and she was visiting the day that Louie disappeared.

“My mother was a little grumpy as she had thought he had stopped his wandering. We worried he might forget where his home was,” Marolyn tells The Dodo.

But the family soon realized that this was not one of Louie’s regular outings.

Then that evening, Louie finally returned. His family let out a collective sigh of relief and discovered that someone had attached a note to his collar.

At first, they were worried. Did Louie get in trouble? Was the note from an angry dog ​​owner? Did Louie bother someone?

Louie collapsed on the ground and was obviously exhausted. He must have had a long day. His family was afraid that someone had hurt him.

But when they read the note, they were amazed by what it said.

“Louie is the hero of the day. He led me to Maddy in distress stuck under a branch pile. Cheers, Rob.”

Rob is a farmer who lives nearby. Louie’s family knows him and his dog Maddy. Louie and Maddy are good friends and they often play together.

Louie’s parents immediately called Rob to find out more about what had happened.

It turned out that Maddy had disappeared from Rob’s house earlier in the day, and he couldn’t find her. He had to run some errands and hoped that Maddy would come back by herself in the meantime. But when he got home, she still wasn’t home and Louie was there waiting for him instead. The sheepdog seemed to want Rob to follow him into the woods.

Rob did, and Louie led him straight to a pile of wood — where Maddy was stuck underneath.

Louie then helped Rob pull away the wood and dig Maddy out. That’s why Louie was so tired.

As soon as Maddy was free, both dogs jumped into a nearby pond to cool off and drink water.

Rob gave Louie a bunch of dog biscuits and attached the note on his collar to let his owners know what he’d been up to.

Louie’s owners and their daughter Marolyn were proud of their dog’s heroic effort. But they were also worried. Louie was exhausted and they were afraid that the long day was too much for his 12-year-old body to bear.

Luckily, he survived the night. The following day, however, Louie was still feeling terrible. He had difficulty walking and looked very tired.

But then Maddy came over, and soon as Louie saw his friend, he became much happier and more relaxed.

What a hero Louie is! Dogs are so wise, and they do some things even better than us humans. Louie knew Maddy was trapped, and without him, Maddy might have died there in the woods.

Please share this nice story to pay tribute to Louie!