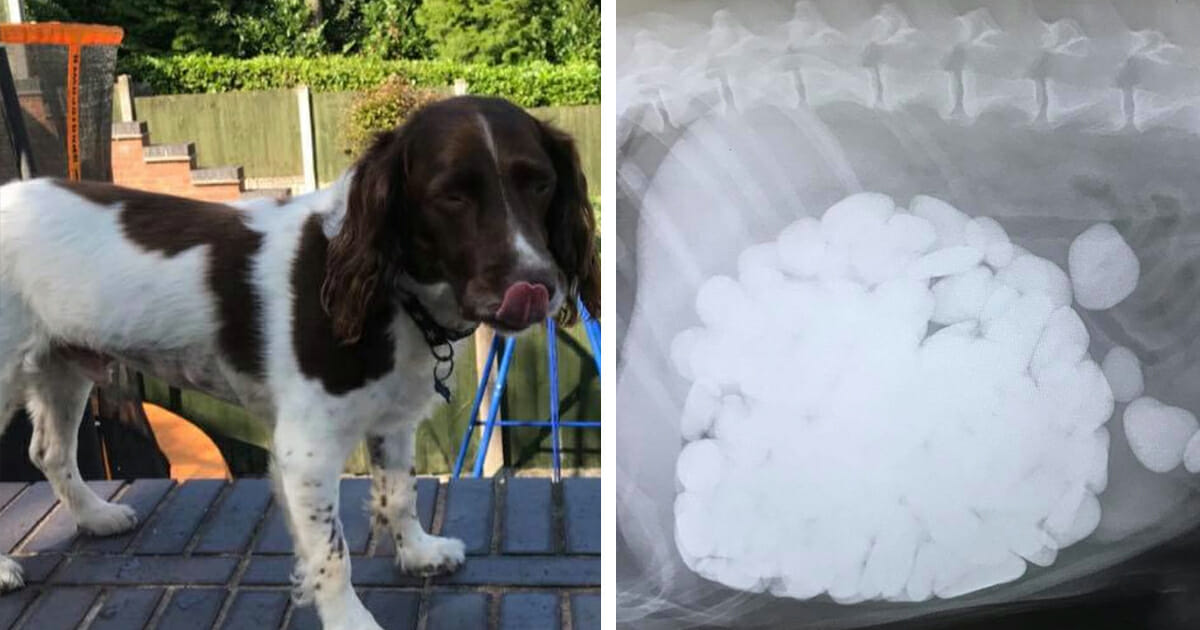 Anyone who’s ever owned a dog can attest to just how difficult it is to monitor them at all times.

For the most part, dogs are intelligent creatures; ones that can be trusted with security and do a great job of sensing danger when humans might otherwise remain ignorant.

And yet there are also times when their behavior leaves us questioning just how they’ve managed to survive as a species for so long.

The family of Springer spaniel Dilyn must have certainly asked themselves the latter question after they were forced to rush their 12-year-old pup to surgery.

When vets took a look at the X-ray scans, they realized Dilyn had swallowed a whole lot of something strange. In fact, terming it ‘something strange’ might be a bit of a understatement …

Dilyn’s family say that on August 17 they took their dog for a walk on a beach in Barmouth, South Wales.

Afterward, they noticed that he had become unwell, and so rushed the poor pup to the vets in order for the experts to take a look at him.

When they did, however, a quite remarkable discovery was made.

After undergoing an X-ray, Dilyn’s owners were amazed to find that he had managed to eat a large number of small stones. In fact, as per the Daily Mail, one vet remarked that it was unlikely that amount had ever been seen by, “any other vet in the UK”.

Dilyn’s owners say he has no history of eating stones, and think that he must have gorged on the rocks in one sitting, as opposed to accumulating them over time.

Hugh Williams, a partner at the vets where Dilyn was treated, said: “We’ve never had anything like this.

“We’ve had dogs swallowing stones before but usually one or two, three at a push – 206 is unheard of.

“We really thought the worst when we saw the X-ray – how are we going to get all these out?

“How much damage has already been done?

“But we’re delighted he’s made a full recovery, he’s really very lucky to be alive.”

Fortunately, little Dilyn was able to make a full recovery, though things could have easily ended up differently. Here’s to hoping he sticks to canine treats in the future.

You should always try to be as attentive as possible concerning what your dog is eating. Share this story if you love our four-legged friend.