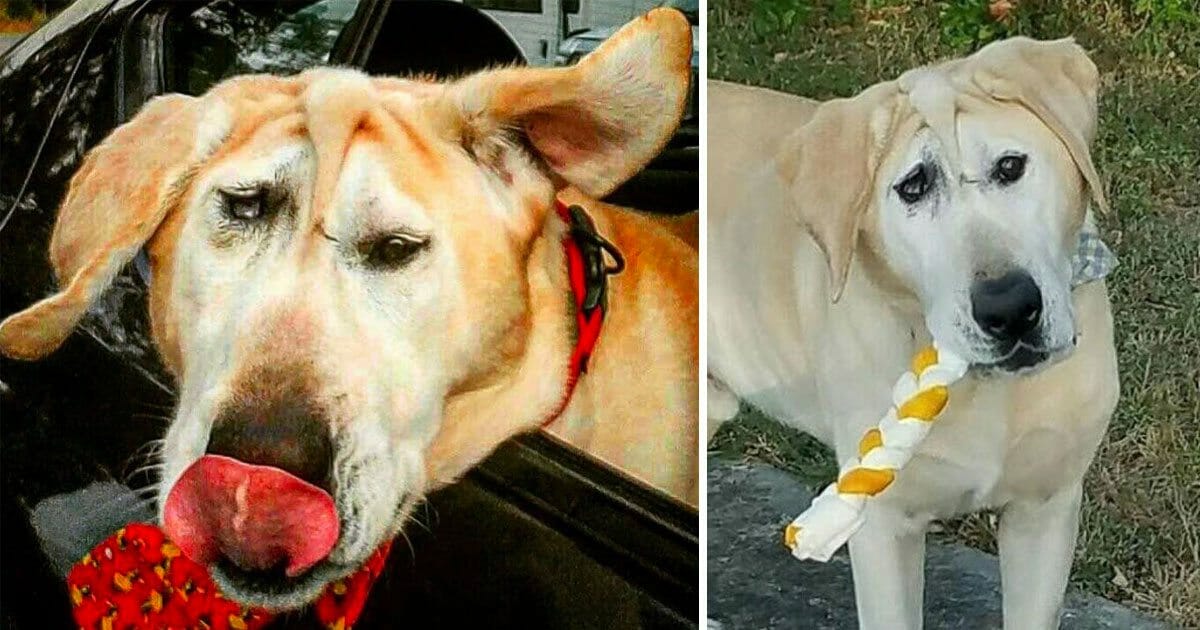 Lucky had little reason to enjoy his life. All of the owners and families who he had been with neglected him; none were interested in showing him the love he deserved.

Born at a puppy factory, Lucky never found someone who wanted him to adopt him. In the end, he was given away free of charge.

The reason? Lucky had a malformed face and didn’t look like other dogs.

Lucky spent his life being passed around from place to place – never living in one house or having the chance to prove himself. Often, he was passed to the next owner for free; no one wanted to keep him for long.

Over the years, Lucky has had plenty of owners, but not one of them really attended his needs properly. Most recently, he lived with a family in Austin, Texas, but he was sadly neglected and left to fend for himself.

Since the family’s cats didn’t like Lucky being there, he had to stay outside 24 hours a day.

He was left in the yard, tied to a tree, without proper food or a comfortable place to sleep. The idea of being fussed, or getting the care and love a dog might usually benefit from in a home, was out of the question.

When the family decided to move, the call was made to get rid of Lucky without a second thought.

They contacted a dog shelter in the area. Volunteers from the shelter began looking for a new place for him to stay, while Lucky was left with his ‘family’ until they moved house.

The animal shelter finally found a new family who were willing to foster Lucky. Sadly, it didn’t take long for them to change their minds; one look at Lucky’s face saw them back out of the move.

One of the shelter’s volunteers took Lucky to get groomed, before posting a few images of him across social media.

A post eventually came to the attention of Jamie Hult, who asked to meet the dog straight away.

“It just happened to be somebody in my dog rescue world, so right away I contacted him and said ‘I want that dog. I don’t even want to foster it, I wanna take that dog,” Jamie told iHeartdogs.

Unfortunately, Lucky wasn’t in good condition. After several years of mistreatment and neglect he suffered from malnutrition, amongst other things.

He was riddled with fleas and worms, and had never been microchipped.

However, Jamie decided to bring him home. It wouldn’t be easy, but she would do it at all costs.

Thanks to Jamie, Lucky found his forever home. He was finally given the love and care that he had sought for so long.

It’s been one hell of a bumpy ride, but Lucky has made a full recovery and is now enjoying life as a healthy dog.

“He almost didn’t make it. He was in the oxygen tank for a week. I ended up spending like $8000 dollars for treatment to get an MRI just to see what was going on because he was so infested… He was like skin and bones,” Jamie says.

Jamie was so firm on her stance of helping Lucky, that she knew she’d do whatever it took to restore his health.

“It was a touch-and-go and we almost lost him once. I said to my vet, ‘I don’t care – for this particular dog just do whatever you need to and I will pay whatever it is. Don’t hold back.’ And he made it. He’s healthy. He’s in the free and clear.”

With the helps of veterinarians and Jamie’s huge heart, Lucky managed to turn things around. He’s now doing brilliantly!

Since adopting Lucky, Jamie’s had to put up with several derisory comments over the way he looks. She doesn’t care though; she loves Lucky for who he is.

Jamie says: “When I first got him I really wanted him to be associated with people, but people kept asking about his face and they would laugh at him. I was like ‘Don’t worry, go ahead and laugh.’ I started making ties for him. Just so that it would offset his face and just maybe the tie would draw it in where he’s cuter, where he’s not as scary.”

Jamie even decided to change Lucky’s name. She renamed him Beaux Tox, for two reasons.

“The reason I named him Beaux Tox is because clearly he looks like he needs botox, and that’s okay. We appreciate beauty in all forms. And the dog bills cost me a fortune which is the reason I don’t have botox!”

Lucky is, by all accounts, a carefree and affectionate dog. He takes good care of his younger sister and has also helped to raise the kittens Jamie adopted.

“I’m grateful I got Beaux, and we still rescue and foster,” Jamie concluded. “He’s fostered kittens. Beaux Tox is good with anything. He’s good with kittens, baby skunks, cats. He’ll watch the tarantula for an hour. He’s very intrigued by everything… for him, everything is exciting.”

What a heartwarming adoption story, and a classic example of why a book should never be judged by its cover. Just because an animal looks different from the rest, doesn’t mean it’s any less deserving of a chance in life.

Share this with your friends and family to honour Lucky’s battle!