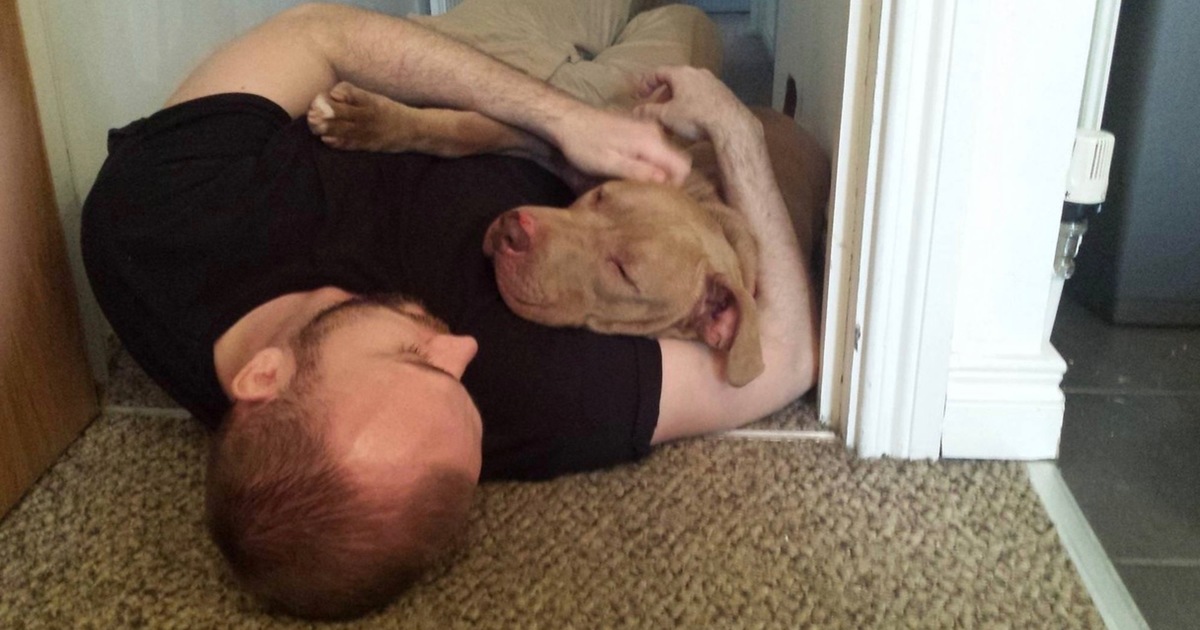 A Labrador-Staffordshire bull terrier cross named Hank is back at home after spending 19 days in puppy prison. Authorities in Belfast, Northern Ireland seized the dog on suspicion of being a pit bull, as Northern Irish law prohibits the breed. Animal wardens planned to put Hank down simply for looking the way he does.

Heartbroken, Hank’s owner’s went on social media to alert the world about their dog’s situation. Hundreds of thousands of animal lovers from across the globe then came to Hank’s defense and demanded he be returned to his family. And fortunately, the Belfast city council agreed to free Hank and voted to release the lovable dog. Read his story below:

On July 4th, Hank was taken from his home in Belfast, Nothern Ireland because authorities there suspected he’s a pit bull.

And even though Hank’s owners, Leonard Collins and Joanne Meadows, informed them that Hank is a Labrador-Staffordshire bull terrier cross, eight police officers and four dog wardens took the dog from their home while they were out. All that was left when the couple returned home was a note letting them know that they’d taken Hank.

The dog wardens took Hank to an undisclosed location and refused to even grant his family even visiting rights. Hank was kept locked up in a kennel, but on the outside, the condemned dog quickly found supporters.

Almost 300,000 people from around the world signed a petition demanding Hank’s release. And on July 28, the Belfast City Council made an exemption for Hank, giving the dog his freedom back.

“This means that, although assessed by an appropriate expert to be a pit bull terrier type, he can be returned to his owners, following court approval with conditions, most of which are mandatory under this legislation,” the council wrote in a press release.

Finally, after spending 19 nights in a government kennel, Hank was released and Collins was able to write the truly wonderful words on Facebook: “Hank’s home.”

When Hank arrived home, he was showered with gifts from well-wishers from across the globe.

Owner Leonard Collins says that is was the overwhelming public support that freed Hank. “It was the primary factor,” he told The Dodo. “Without that, Hank might have never gotten out.”

But while Hank is back in the loving arms of his family, many other dogs and their families continue to be the target of legislation that targets specific breeds. In countries like Canada, the US, and the UK, dogs are taken by authories and put to sleep simply for being a particular breed, even if they wouldn’t hurt a flea.

The result? Thousands of needless deaths, and heartbreak for the children and families who lost their best friend.

Join the fight against breed discrimination here and share this article to raise awareness about this issue!