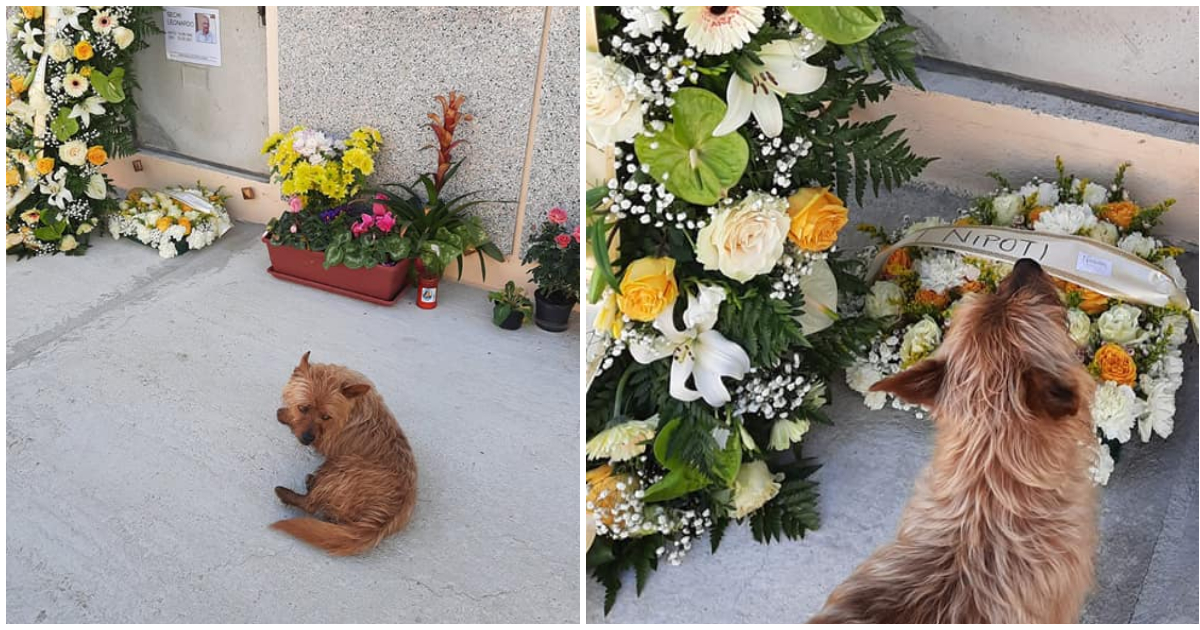 It’s amazing how emotionally intelligent pets can be. When their owners pass away, they seem to understand the sad situation — and they can even grieve for their lost loved ones.

Sometimes pets even mourn by visiting graves, paying respects to their departed friends. Like one little dog, who travels every day to visit his friend.

A man named Leonardo, from Italy, always loved his loyal dog Fulmine, who he adopted as a puppy. The two were inseparable best friends for seven years.

“They were very affectionate,” Leonardo’s daughter Sara Sechi told The Dodo. “They were always cuddling.”

Sadly, their friendship came to an end when Leonardo became ill. He passed away on February 22.

His family took in Fulmine, and it became immediately clear that he missed Leonardo a lot. He barely ate, and kept holding out hope that Leonardo would show up.

“Every time a car approached, Fulmine would run to the gate in case it was my father,” Sara said.

Little did they know, Fulmine would soon find a way to see his owner again.

Leonardo was buried in a cemetery in Sassari, Italy, two kilometers from the family’s home, according to The Florida Star.

But when Sara and her son visited the plot to lay flowers on Leonardo’s grave, they found someone unexpected was already there, paying respects.

Sara was stunned to see the dog there. They had never taken him to the grave. It’s likely that Fulmine had escaped from his enclosure, but it’s not clear how he was able to locate the grave.

“At first, I didn’t believe it,” Sara told the Florida Star. “How could he have found my dad’s cemetery and the grave?”

The only explanation is that a loyal dog will always find a way to be at his owner’s side, no matter what.

“I like to think he’s guided by his love for my father,” Sara told The Dodo. “Or that my father led him there. It’s one of those strange things without a real explanation.”

Locals told Sara they had seen the dog around before, and she realized Fulmine was visiting the grave on a daily basis.

It’s clear that Fulmine really had a connection with Leonardo, and that he’s grieving for his late loved one just like any human would.

“It makes me emotional to think about how much my father loved Fulmine, and how much Fulmine loves him,” Sara said. “It’s sad to see him grieving, but we will slowly overcome this sad moment together.”

It goes to show how much our pets really love us and miss us when we’re gone. While Fulmine is still grieving for his owner, we’re glad he’s found a way to still be by his side.