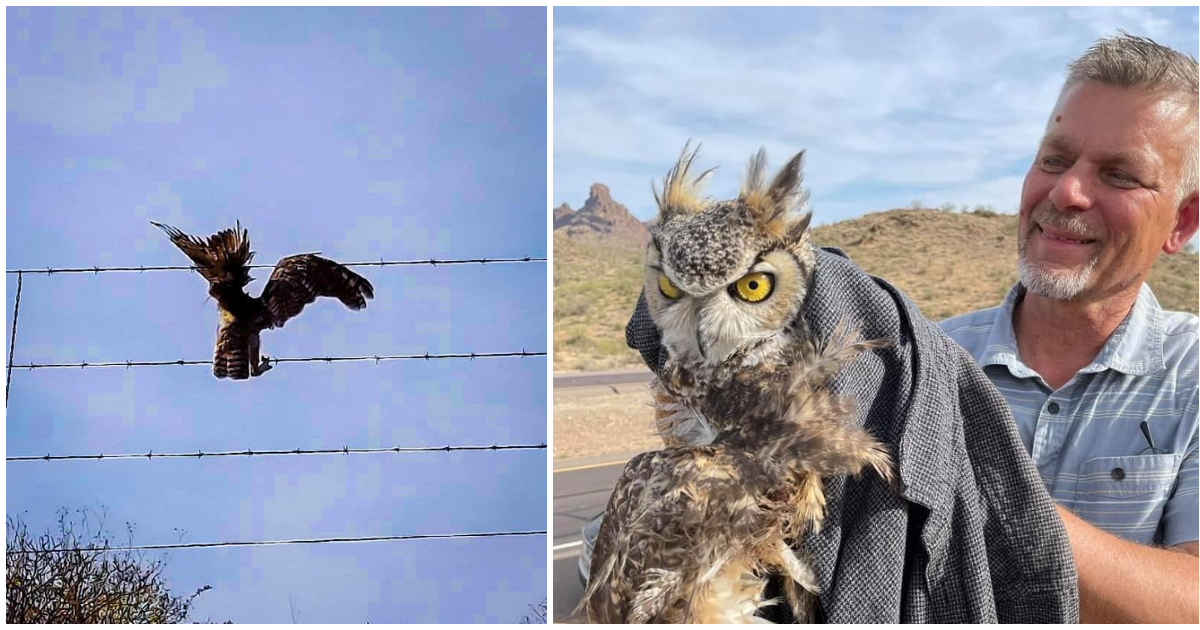 Sometimes animals get themselves into some pretty dangerous situations and need help from people. Luckily, there are kindhearted people in the world willing to go out of their way to save the day.

That was the case recently, when two good samaritans pulled over to rescue an owl in desperate need of help.

Jeff Miller was driving down a highway in Fountain Hills, Arizona. But he caught a sight that made him pull over instantly: an owl was trapped on a barbed wire fence.

The poor bird was panicking and making things even worse. Pulling over to try and help, he put a shirt over the owl to try and calm it.

“I really wanted to get up there to try and get it off the fence,” Jeff told KNXV. “And stop it from suffering and possibly hurting itself more.”

He then got to work trying to free the bird. He said while the first wing came out easily, the second was really stuck: “The flesh was really wrapped up in barbed wire,” Jeff said.

Luckily, he had some help. Amy Burnett, from the Arizona Game and Fish Department, got word of the rescue attempt and ran right over: “I just grabbed my wire cutters and my big thick gloves and a carrier, and I drove out there as fast as I legally could,” she told KNXV.

Together, they clipped the fence around the bird’s wing, allowing it to get free. They took him to the Liberty Wildlife ICU for further help.

Thankfully, the owl did not have any breaks in its wing and was otherwise healthy. It is now recovering in the ICU until its wing is fully healed, and then will be rereleased into the desert.

While many people would’ve ignored the owl and kept driving, Jeff was kind enough to pull over and help — a decision that likely saved the owl’s life.

“If it weren’t for him, this bird would’ve died on that fence,” Amy said. “I’m just really grateful he was there, and he stopped.”

“I’ve always had a heart for animals, especially an animal in distress,” Jeff told ABC 15.

We’re so glad this owl is safe! Thank you to Jeff and Amy for getting this poor bird free.