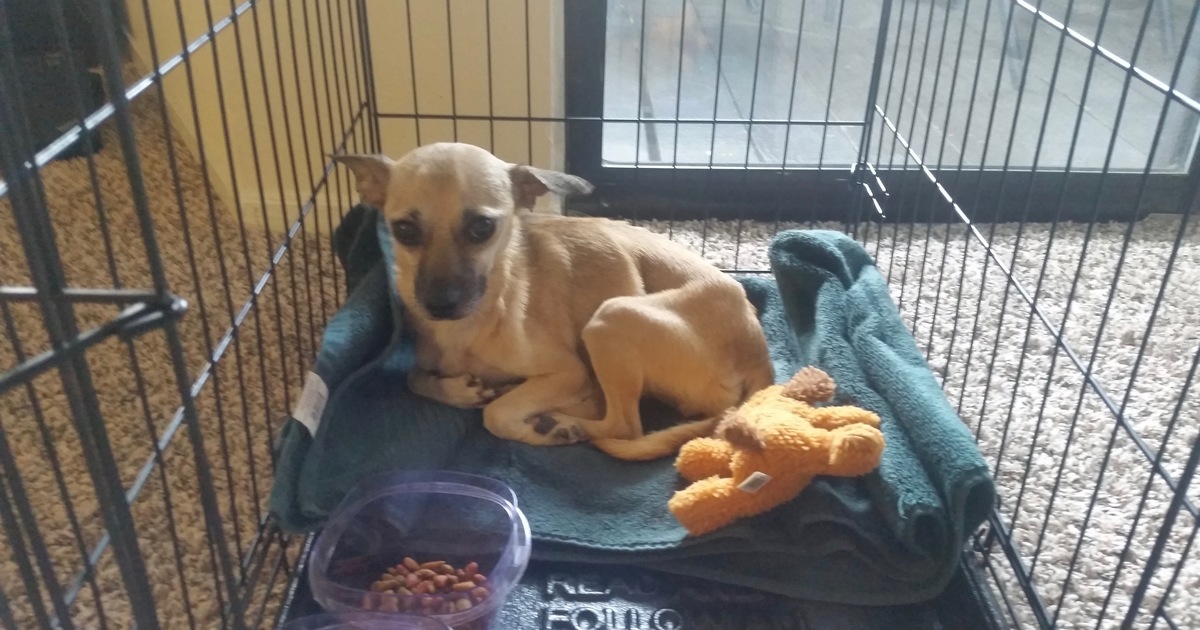 This is one of those stories that could have gone either way.

A dog was starving and on her last legs. Her belly was full of plastic that she ate in desperation when she couldn’t find anything else to eat.

Depending on where she was, or who, if anybody found her, she might not have had much time to live.

But thankfully, when this little dog collapsed out of exhaustion, she chose to to lie down outside the home of some truly kindhearted people.

Cameron Trammell and his girlfriend were out on their Texas balcony last Sunday morning about to head out for the day when they looked down and noticed something.

“I look down from the railing to see a dog. All by herself laying in the grass,” Cameron writes on Imgur. “There’s no one around. I can tell that she’s exhausted. She glances up at me and I immediately know that we have to go down and check on her.”

The couple set aside their plans for the day, grabbed some turkey and water and headed down to check on the dog. And when they got downstairs, they found her emaciated and covered in fleas. They offered her the turkey and water, but besides a little bit of turkey, she didn’t seem interested.

“She had no energy, no emotion, no enthusiasm. We thought about calling the local shelter, but we couldn’t take the risk of them just giving up on her the moment we dropped her off.”

Instead, Cameron and his girlfriend brought the dog home and started off by giving her a flea bath.

“She took it like a champ. Sure she wanted to get away from the water, but she was such a good girl. We gave her two baths with multiple scrubdowns while picking off fleas and washing them down the drain. The amount of fleas was unreal. Every time we thought we had them all, another would rear its ugly head.”

With the bath complete, the dog, whom Cameron called Little One, started to cheer up.

At first, Little One seemed unsure whether she was safe to sleep, but her exhaustian soon kicked back in and she was out cold.

When Little One still wouldn’t eat or drink much, her new friends started to suspect she might have medical issues.

“She threw up multiple times in our apartment. She would drink a little water. Throw up. Eat a little food. Throw up. I thought it might be because she hadn’t had anything for so long that her system couldn’t handle it, but we didn’t know for sure.”

Cameron and his girlfriend then took Little One to the vet for a thorough examination. Her X-rays showed a major blockage, which explained the throwing up. But when a water enema didn’t remove the blockage, the veterinarian suggested surgery. The couple weren’t sure if the surgery would be successful or if they’ld have enough money to pay for it.

Before the surgery, Cameron wrote on Imgur, “There was only one choice. Let’s do it! She deserves a chance. The surgery certainly isn’t in our budget, but there was absolutely NO way we were going to tell them to just put her down. A dog as sweet as this is more than worth it. We hadn’t planned on owning a dog, especially spending thousands of dollars on just a chance to own one, but we had to try.”

After a nerve wracking wait, they received the news—the surgery was a success! Sure, Little One had a large wound from the incision, but it was necessary due to how much area they had to cover. It turns out that Little One had been so hungry that she started eat plastic, and eventually most of her stomach was full of it.

With Little One on the mend, the couple received the bill for surgery and it’s nearly $3,000 in addition to another bill for $810 for the initial visit. All told, the couple have spent $5,000 caring for Little One over the past week. So in order to cover the costs, they’ve started a GoFundMe page. Donations have already started pouring in but they still need more than $1,000.

Cameron writes, “Thank you so much to everyone who donated, said a prayer, kept her in your thoughts, and help this gain exposure. Never did I expect so many amazing people to come forward with such generosity. You guys are absolutely incredible!”

Now Little One is enjoying her new forever home—and she’s also happy to finally be able to eat and drink again without pain. Cameron writes, “Here she is back home with us waiting for dinner. Those eyes could melt the coldest of hearts.”

What a great stroke of luck that Little One happened to end up outside the door of such wonderful people! I hope you fatten up, Little One, and enjoy your new home!

Please consider donating to Little One’s GoFundMe page and don’t forget to share this heartwarming story with your friends and family!