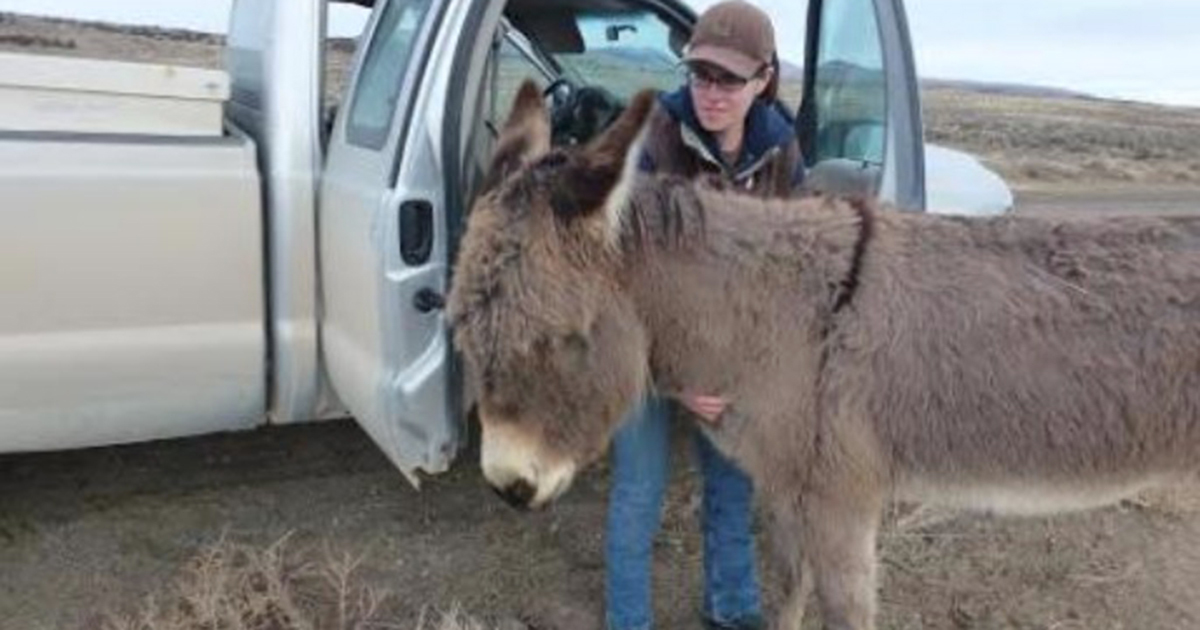 He was abandoned on the roadside, his life in the hands of fate. He waited for help every day, hoping someone would stop and take care of him. Billy’s sad story could have ended there, but thanks to a group of heroes from a mining company, everything changed.

Little donkey Billy’s story is a sad one. He was completely abandoned in the middle of nowhere, in Nevada, USA, without water, protection or care.

He grew thinner and thinner, and his hooves were overgrown. But Billy was a hopeful donkey. He stood by the roadside and waited, hoping that someone would one day stop to rescue him.

Billy’s story, as you may already be hoping (or thinking!) soon offers a glimmer of hope. A group of employees from a mining company noticed little Billy standing along the road day after day. When they began to realize that the donkey had been abandoned there, they worried about him.

“He would climb into your truck if you let him,” the miners said, according to The Dodo.

Billy was not just hungry, he was lonely, and craved company.

Eventually the miners decided to phone the Bureau of Land Management (BLM), responsible for the area where Billy was dumped. The organization’s wild horse specialist, Shawna Richardson, then contacted the American Wild Horse Preservation Campaign (AWHPC) to help find a home for the lonely little donkey.

As they awaited word on a home for Billy, the miners persuaded farm owners in the area to take the poor donkey in, rather than have him stand sadly by the road.

Everyone wanted Billy to find a good home and the AWHPC knew just where to turn. They reached out to the Center for Animal Protection and Education (CAPE). An anonymous donor had created a special project at CAPE to help wild burros in the United States.

Billy was not a wild burro, so he was not protected by federal law, and was considered “stray livestock” meaning his life could land in the hands of any owner through an auction. Luckily, the Nevada Department of Agriculture came to the conclusion that it was best for Billy to be sold to the animal relief organization directly instead of having to put him through a stressful cattle auction.

Now Billy is adjusting to life perfectly, becoming slowly but surely accustomed to a peaceful life in the care of the kind people at the animal shelter. He has gained weight, five new friends and a shiny coat.

“Billy has a distinctive bray that sounds more like a honking fog horn than a hee-haw. He brings a huge smile to everyone’s face and we are so lucky to have him at the sanctuary,” CAPE director JP Novic said.

Thanks to everyone’s help and cooperation, Billy was saved from a tragic fate in Nevada. Today, Billy has his own sponsor, Ellen. She visits regularly to interact with the donkey and, naturally, spoil him with apples.

The positive actions of a few men can go a long way. Never forget that helping is contagious! strong>

Take a look at this heartwarming video of Billy and his sponsor Ellen: