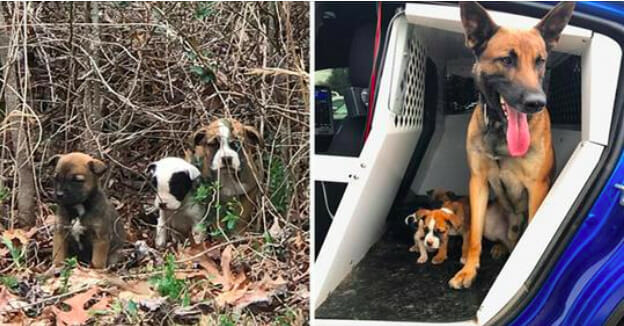 We often bring you stories of heroic humans rescuing animals in distress. But animals can also be animal heroes — as this next story proves.

It all began when 3 adorable puppies were discovered abandoned in a remote dumping ground in Atlanta, Georgia.

K-9 dog Tek was out one day by his partner’s side, Trooper Jordan Ennis.

They were on a routine patrol when they suddenly came across something rather unusual: three small puppies, who had been abandoned in a dump site.

The poor pups stood near each other for comfort and looked terribly sad.

The officer immediately knew he had to bring the vulnerable pets to safety. But what immediately got his attention was how his partner Tek seemed to immediately understand the exact same thing.

As Jordan gently scooped the puppies up and brought them into his patrol car, K-9 remained nearby watching every move with detail and offering full canine support.

Once all loaded into the car, Tek immediately hopped in to stay as close as possible to his new friends, looking as fatherly as can be! 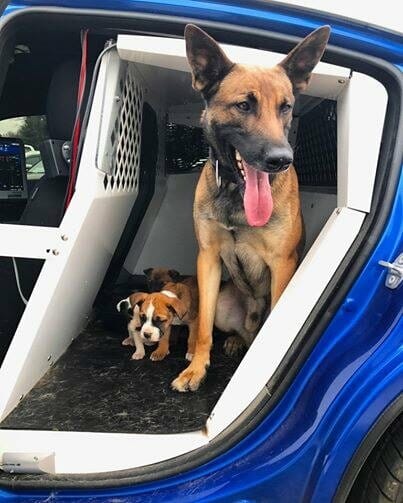 It remains unclear how the puppies ended up abandoned in such a remote location, but what’s certain is that abandoning helpless puppies is a monstrous deed.

“[Jordan] knew no one was coming for them, so he and his K-9, Tek, brought the puppies to Headquarters where they were all promptly adopted,” Georgia’s Department of Public Safety wrote on Facebook. “A Trooper never knows what he may encounter on a shift, but a day with puppies is a good day.”

What a sweet, perfect ending to these poor pups’ unfortunate predicament. Share to thank officer Jordan and of course Tek for their prompt and compassionate rescue.