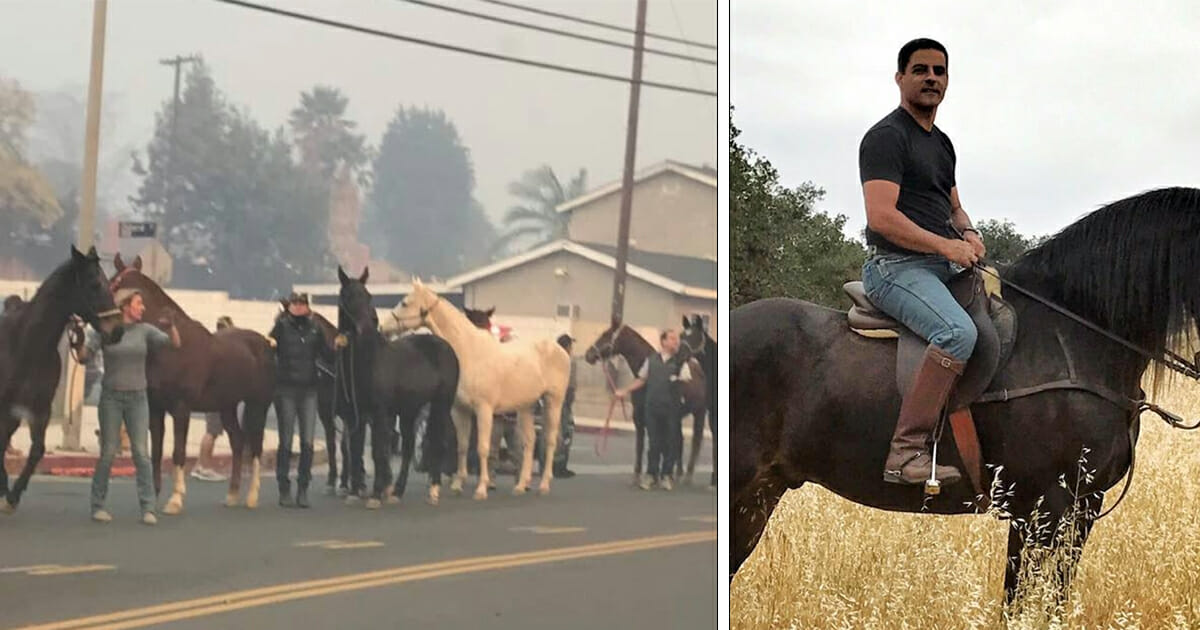 To say Ardeshir Radpour has had an affinity for horses his entire life is an understatement. Since his college days, he’s competed in Polo, and he’s aimed to consistently include horses in his life one way or another.

Not only that, but Ardeshir has plenty of experience in the entertainment industry as well. His bio describes him as a “Professional Polo Player,” who is “Trained in Classical Dressage”.

Ardeshir works with horses daily, so it’s safe to assume he knows a thing or two when it comes to their wants and needs …

As one might expect, his love of horses transcends merely those he comes into contact with. He has a passion for all the horses of the world, and so when the California fires were raging he knew he had little choice but to help.

Factoring in the creatures he saved from the Woolsey Fire ravaging Southern California, it’s claimed Ardeshir has rescued hundreds of horses.

Speaking to NowThis, he revealed how a friend had called him in the midst of an emergency: “‘Grab your truck and trailer, come and help us out,’” was what the friend said.

I have had a number of people ask me. Yes! this is me and my horse and all of my own kit. Photo was taken by my very good friend and beyond exceptional talent, Holly Martin

So it was that he joined the effort to get the horses out of the clutches of the fire. Only, it wasn’t as easy as it might have been.

The people were panicking, and so chaos reigned supreme. In the end, only a few horses were whisked to safety before the routes were closed down.

“You’d get a message from someone who needed horses rescued and then you’d hear nothing for hours,” Ardeshir explained.

“Either they were out of range, or the towers were down, or who knows. This one was a really helpless situation.

“People were calling and there was just no way for me to get there.”

“I remember turning my head, looking to the horizon and I was like, that’s a massive red skyline. We need to go now. So we loaded the horses up real fast, got a load out, got a second load, and that fire was engulfing everything.”

In the face of the flames, Ardeshir was able to save horses that might otherwise have been left to perish. As he says, horses don’t have a voice for themselves, but they live in our world and so we’re obligated to help them where possible.

“A lot of people say that people are doing heroic things. I don’t think this is heroic. And I don’t think anybody who’s doing it thinks it’s heroic. It’s just what we need to do as human beings to help each other out,” he explains.

We think Ardeshir is a true animal hero!

Share this article to pay tribute to a brave man with a heart of gold.