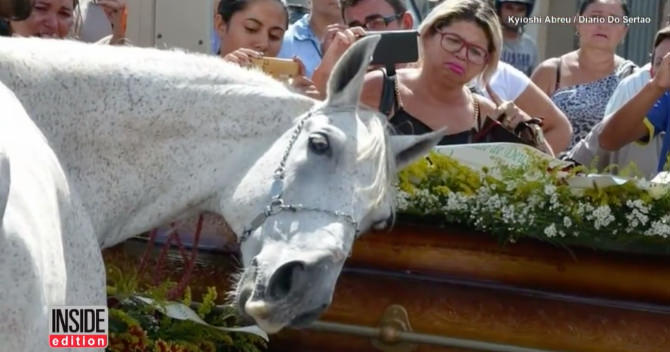 Wagner Lima and his horse Sereno were best friends for years. They stuck together through blood, sweat and tears and bonded through shared joy, passion and happiness.

Then suddenly Wagner died – and Sereno was left heartbroken. But thanks to Wagner’s brother, Sereno was given the chance to say one last goodbye.

It was New Year’s day that Brazilian Wagner Lima died in a tragic motorcycle accident. He was only 34 years old. His best friend, companion and colleague, horse Sereno, lost a truly special friendship that day. Wagner and Sereno had competed together in rodeo on a semi-professional level for nearly ten years. When you’re so close to someone for so many years, there is no doubt that you build a strong bond.

“Wagner had a passion and a great love for (Sereno). Sometimes he would even stop buying things for himself to make sure he could afford to buy horse feed,” Wagner’s brother told USA Today.

When it was finally time for the funeral, there was no doubt in the brother’s mind – Sereno had to have the chance to be present and say goodbye to his friend. What nobody could have anticipated was how Sereno would react. After all, all he would see was a casket. But the beautiful white horse appeared to know exactly who lay in the casket. As soon as the coffin approached, he began to nose eagerly around.

It seemed that Sereno understood – he stepped forward and laid his head on the coffin. “As we brought the coffin out at the beginning of the funeral, (Sereno) sounded like he was crying and as if he recognized that his owner was finally leaving him. He pounded the ground with his hooves and kept on whinnying. It was very sad,” says Wagner’s brother. Many at the funeral, including Wagner’s brother, were crying with Sereno. After the tragic incident that took Wagner’s life at only 34 years old, there were many people there who had lost a very good friend. This emotional story shows that there really is a special relationship between humans and animals, which we have to protect.

Make sure to share this beautiful story with your friends.