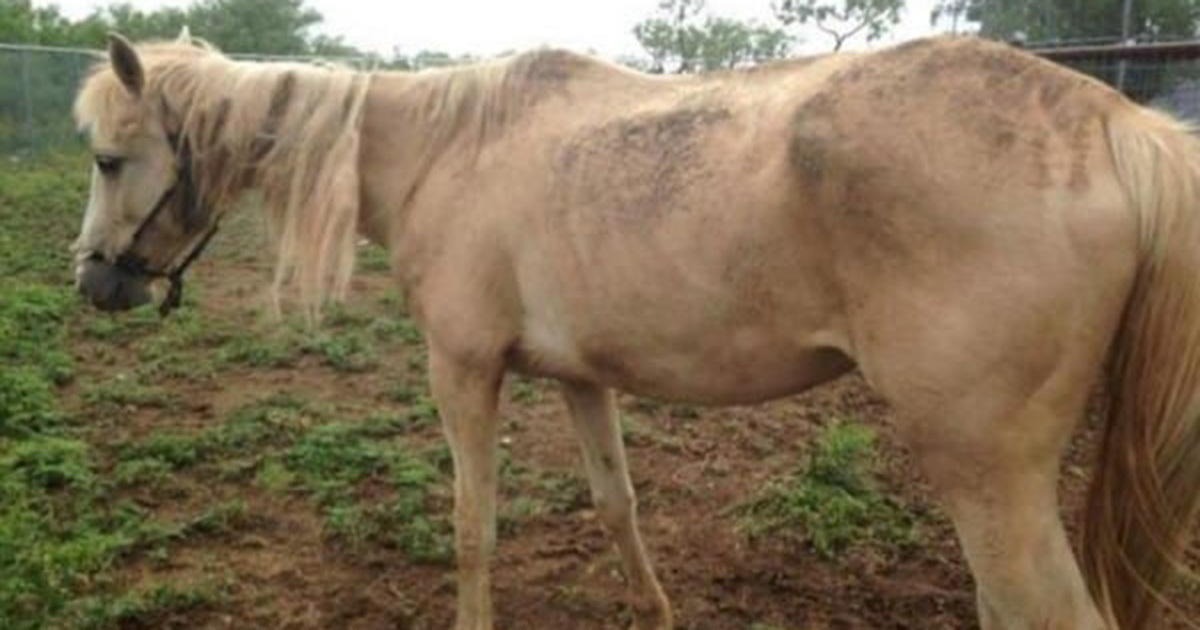 Kimberly Lewis had long dreamed of getting a horse. The opportunity finally came when in her adulthood she decided to buy a horse along with her husband.

Her husband would buy it as a gift to her – all she needed to do is choose the horse she wanted.

The couple went out to different vendors to find the horse of her dreams, but even though she looked at several beautiful horses, none felt right.

And then she saw Dolly.

Kimberly and her husband were on their way home in the car when she accidentally saw Dolly from the window. She immediately felt a connection with the horse, despite that Dolly didn’t look anything like the dream horse she had envisioned.

Dolly was unkempt, skinny and dirty. Her eyes were dull, gray and tired. She lived on a farm that took care of horses who had been mistreated by their owners, and Dolly had recently moved there because her owner did not take good care of her. The vet estimated that Dolly was about 4 or 5-years-old, but no one knew for sure.

Kimberly felt a strong desire to take Dolly home, and give her all the things that her previous owner did not. She wanted to see Dolly become strong, healthy and happy again.

Said and done – the couple purchased Dolly for just US $50, and took her home.

No one knew if Dolly would ever completely recover. It might never be possible to ride her, because she was in such poor condition. But Kimberly didn’t care.

“All I knew was she deserves a chance to be a horse,” she says.

It has now been one year since Kimberly bought Dolly, and she indeed become a new horse!

She not only looks physically healthier – she is also happier and her eyes are no longer gray and sad as they were the year before.

“The biggest change is her eyes and her personality,” Lewis says.

“As corny as it sounds, we rescued each other. I am constantly learning from her, becoming a better person because of her,” Kimberly adds.

I got so happy when I saw what Dolly looks like today! It’s so fortunate that Kimberly chose exactly that horse as her companion. I think they have a long and bright future together!