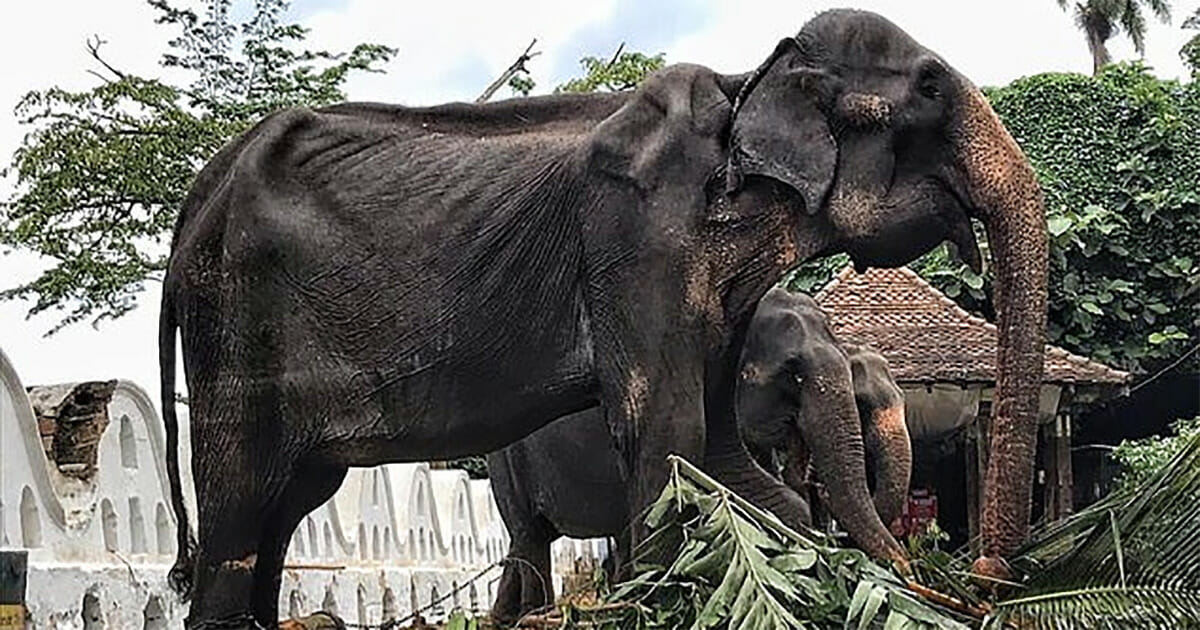 Upsetting images of an emaciated elephant who is being forced to join a 10-day parade in Sri Lanka have emerged.

The 70-year-old elephant called Tikiiri will wear a costume during the 10-day Buddhist festival so no one will be able to see her protruding ribs.

She will join 60 other elephants and be forced to walk many miles each evening despite her frail health.

The shocking images have been shared around the world and thousands of people have signed a petition to end this abuse.

The starving elephant will also work alongside dancers. jugglers, fire-breathers and musicians.

Save the Elephant Foundation shared the images as part of World Elephant Day and an online petition is attracting the attention of thousands.

“Tikiiri joins in the parade early every evening until late at night every night for ten consecutive nights, amidst the noise, the fireworks, and smoke,” the petition said.

“She walks many kilometers every night so that people will feel blessed during the ceremony.”

Tikiiri will wear a glamorous costume during the parade so nobody will see her starved body underneath.

Tikiri update. Please pray for her. It is too tiring for her to walk and work. On the day we met her the vet said she…

Posted by Save Elephant Foundation on Thursday, 15 August 2019

“No one sees the tears in her eyes, injured by the bright lights that decorate her mask, no one sees her difficulty to step as her legs are short shackled while she walks,” the petition reads.

“How can we call this [the festival] a blessing, or something holy, if we make other lives to suffer?”

The petition already has almost 12,000 signatures with so many comments from outraged animal lovers.

The petition includes a message to the Prime Minister of Sri Lanka Ranil Wickremesinghe calling for this barbaric treatment of elephants to stop.

Humans. We are the worst thing to happen to this planet. Our cruelty beyond measure. If animals could speak, we would weep. If nature had a voice, we would have to hide away in shame.