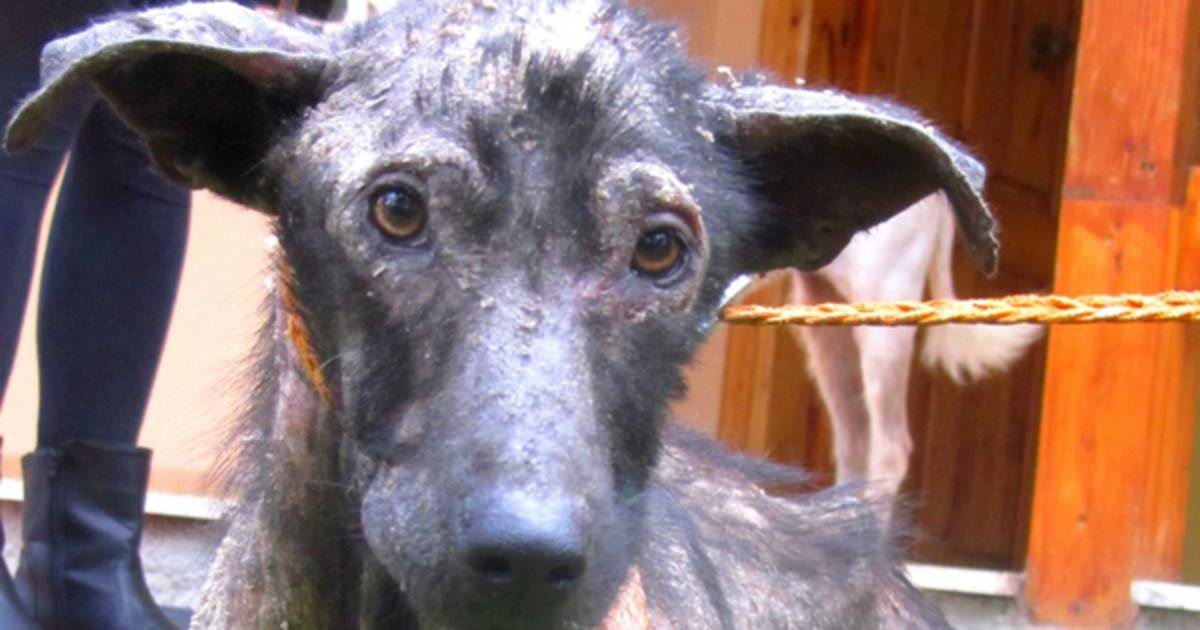 Getting a dog is a big decision, and being a dog owner is a lot of responsibility. The wonderful animals aren’t a toy that you can throw away when they’re not fun anymore.

Unfortunately, too many people don’t take their duties seriously, which is one of the reasons why there are millions of homeless dogs around the world.

However, there are also millions of people out there who care about dogs and do what they can to help these abandoned animals.

One person who refuses to give up is a Greek woman named Valia Orfanidou.

When she saw a photo of what was described as a “skeleton dog” on Facebook, she thought the image was taken from a horror movie.

The poor dog was so thin that you could clearly see his ribs. The dog lived on the tracks at a train station in Greece.

It was obvious that he didn’t have many days left to live, but no one had managed to get near him.

However, Valia decided to give it a try and went looking for the dog—a decision that changed everything.

Valia and a friend walked more than 7 miles looking for Billy, as Valia later came to call the dog.

At first, Billy was scared and shy, but soon, he agreed to follow Valia.

That night, Valia and Billy went to a veterinarian in Athens.

Although Valia had seen photos on Facebook, she was still shocked to see the state that Billy was in. She was sure the vet would say that there was nothing they do to save Billy.

But to Valia’s surprise, the vet explained that Billy “just” suffered from a highly contagious but treatable form of scabies.

Valia brought Billy home and quarantined him in one of her bathrooms.

Billy was still nervous, but eventually, he sat down on a blanket and ate some of the food that Valia gave him.

Then, the exhausted dog slept for several hours.

Over the next few weeks, Billy started transforming both on the outside and the inside.

He gained weight and became increasingly comfortable in Valia’s house. He ate four times a day, and when he wasn’t eating, he slept.

Soon, Billy had put on so much weight and healed so much that he was almost unrecognizable.

Billy started playing more and got the chance to meet other dogs.

Just look at Billy now. Hasn’t he made an incredible transformation?

It was obvious that Valia and Billy had formed a strong bond. But at the same time, Valia knew it was time to find a permanent home for Billy.

Fortunately, she soon got in touch with someone who wanted to adopt Billy, and it turned out to be the perfect match.

A Greek woman named Emma who lived in Switzerland had followed Billy’s journey on Facebook.

After talking to Emma, Valia knew that she could give Billy the wonderful and loving home he deserved.

She took Billy to the airport, where she said goodbye to him and wished him a safe journey to Switzerland.

The first night in Billy spent in his new home, Valia Skyped him and Emma.

Valia was delighted to see how happy Billy seemed to be. Emma continued sending photos and videos from Billy.

The two women have now sent over 2,300 messages to each other, according to Valia.

One day, Emma told Valia that she was planning to visit Greece for Christmas.

Of course, she took Billy.

Valia was both happy and nervous about seeing her beloved friend again.

But when the reunion finally happened, it was as wonderful as Valia had imagined. Valia was so pleased to see how much the dog had grown and how much he was enjoying his new life.

Take a look at Billy’s wonderful journey, from the railroad tracks in Greece to his new home in Switzerland, in the video below.

You’ll also see Valia’s reunion with the “skeleton dog” that nobody dared to get close to. Nice Billy!

Do you also think that Billy’s amazing story deserves to be heard by more people? Share it with your friends on Facebook!