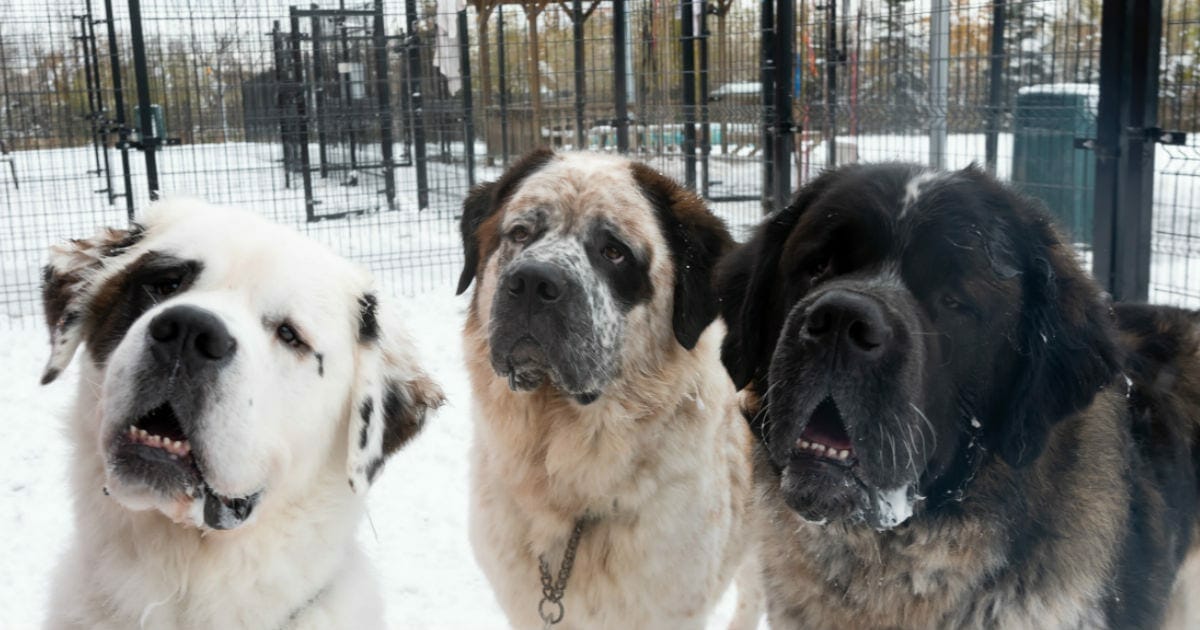 Try as I might, I’ll never quite understand how people can dump animals at shelters and drive away as though their lives are now better off.

I can accept than in some extreme situations a home can be untenable for a pet, and in some of those cases there is no alternative but to try and re-home an animal through a shelter.

But in the majority of instances the blame – whether through lack of foresight, impetus or simply compassion – lies with the owner. In October 2018, the Edmonton Human Society received three Saint Bernards named Goliath, Gunther, and Gasket.

They didn’t know where they’d come from or how they ended up in the shelter system, but they quickly realized that these three dogs were special …

Wanted: Special Adopter!We are facing a giant adoption challenge (literally) and need your help to find these three…

When the pups arrived at the shelter, aside from being slightly underweight they were perfectly healthy. In fact, they exhibited no signs of distress at all … except when the shelter tried to separate them.

It transpired that the brothers shared an exceptional bond, one that meant they would constantly look for each other when apart. Not only that, but all three panted nervously and paced around when the others were absent … exhibiting classic signs of anxiety.

Looking for a home

As a result, the Humane Society decided there was simply no way they could be re-homed unless someone agreed to take on all three.

WOW! Since putting out the call for help to find a forever home for our trio of bonded Saint Bernard dogs, we have…

Jamey Blair, Manager of Animal Health & Protection at EHS, said in a press release: “These three gentle giants have won over the hearts of staff and volunteers – even with the excessive drool. While their status as bonded pets creates a unique challenge to find a home that can care for all 350 pounds of them, we are confident that there is a family out there who will give these three dogs their second chance.”

We have a very important PUP-DATE! ??? Goliath, Gasket & Gunther, the three Saint Bernard dogs who won the hearts of…

Of course, finding a home for three such gentle giants is no easy task. Combined, the dogs weigh 350lbs, whilst they not only require a lot of space to run and play but also around $350 worth of food each month.

Nevertheless, the shelter did their best to get the word out. Low and behold, after their story went viral, the three dogs received no end of offers. Applications from people who lived in Canada, the U.S. and even Australia poured in – so many, in fact, that after a time the Humane Society had to stop accepting them.

In the end, a family from Edmonton was chosen, with the shelter deeming them capable of providing the perfect forever home for Goliath, Gunther, and Gasket.

The three dogs are now happy and settled in their new environment. They have a huge yard to play in and are delighted to be together … as it should be.

We’re so happy to see these three dogs stay together!