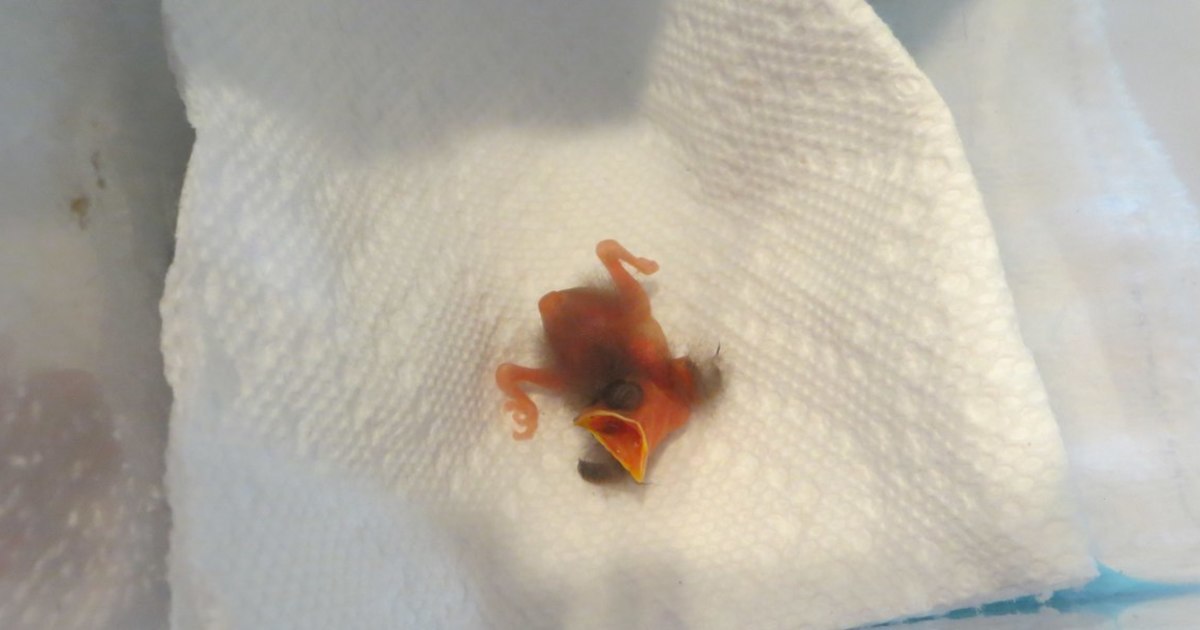 A jogger was was out on his usual route when he saw something unusual on the sidewalk.

At first he didn’t understand what it was, but it turned out to be a tiny baby bird that had probably fallen out of her nest.

She had zero chance of surviving, and although the jogger wanted to put her back in her nest, he couldn’t find it anywhere.

Fortunately, though, the jogger’s sister is a veterinarian. So instead of this being the end of the story, it was the beginning of a beautiful journey.

Here’s how the baby bird looked when she was found, says Imgur user “DachsUndDachshund.”

Not many people would have been able to tell what kind of bird she was, or even that she was a bird.

The jogger gave the naked little baby his sister, a veterinarian. She put the bird in an incubator to give her the temperature and humidity she needed.

They feed the little bird every 30 minutes for 14 hours a day.

Feeding Dumpling was a full time job, and the menu featured worms, crickets, and grasshoppers.

An interesting note: Even in her condition and with her eyes closed, this little warrior knew enough to back up to the edge of her nest to poop over the side, so she didn’t get her nest dirty.

Even more feathers! Now she was really starting to look like a bird!

By now, her eyes had opened and her wings were developing.

Can you imagine what growing up is like for birds?

What an appetite! By this time, she was eating three three large crickets and/or waxworms at every feeding.

At last, Dumpling’s feathers were fully developed and she was ready to be taken out of the incubator.

Here, Dumpling is getting acquainted with her new cage and is experiencing some new materials for the first time.

As a young bird, Dumpling wasn’t yet fully developed, but she had already come a long way.

For the first time, she sat on a small stick. Another milestone!

After 12 days, Dumpling’s diet was supplemented with seeds and she didn’t need to be hand fed anymore.

Almost two weeks after birth, Dumpling was doing strength training and practicing balancing on her stick.

Here she is at weeks old. She was certainly growing up fast!

Time to move into a bigger cage. Here the veterinarian has given Dumpling various branches and leaves, so she can get used to her natural diet.

At this point, the vet occasionally put Dumpling’s cage on the deck to introduce her to wind and sun.

This also gave her the chance to meet other birds and hear their songs.

By now, the vet believed that the bird was either a chipping sparrow or a white-crown sparrow.

It’s clear that Dumpling’s feathers would give her good camouflage in bushes and trees.

Dumpling loved all of the new leafy branches we’d put in for her,” the veterinarian wrote.

A large part of a sparrow’s diet in the wild are tree buds and Dumpling immediately gobbled up all that she came across.

Dumpling was ready to be released into the wild. But violent storms and heavy rain meant she had to wait a few days…

On the 36th day, when the weather had settled, it was finally time.

Dumpling’s guardian angels took her to the place where she was found in the hope she would find some of her brothers and sisters.

After a few minutes, Dumpling jumped out of her cage and flew into the trees. She immediately began to examine the branches, nibble on tree buds, and jump from branch to branch. Just like a wild bird!

Of course, only people who know what they’re doing should take care of birds like Dumpling. If you find a wounded animal, you should call an animal rescue service.

In this case, everything went well, as a trained veterinarian handled the entire process.

This little bird escaped a tragic fate and we got to see a bird grow up from day one.

Share if you think more people should see Dumpling’s journey!