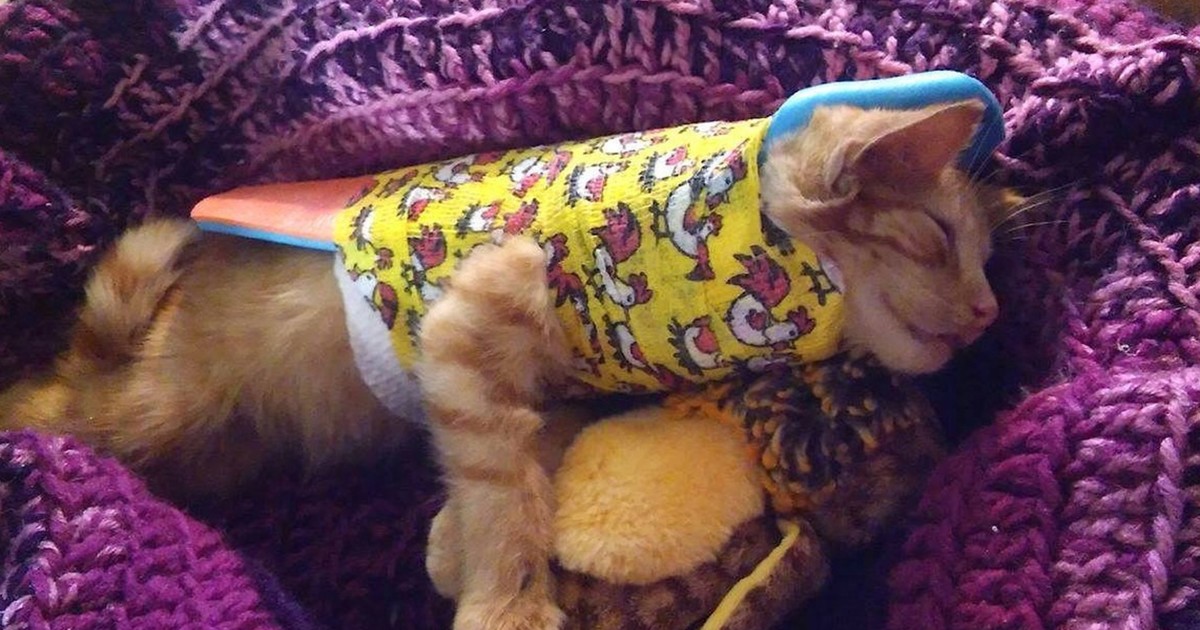 A tiny tabby kitten lay by the side of the road. He couldn’t move a muscle and wouldn’t have lasted long—if it weren’t for one kind soul who saw him and brought him to safety.

That person reached out to Caring Fields Felines in Palm City, Florida, and the sanctuary’s executive director, Pauline Glover, “just couldn’t say no,” as she told The Dodo.

Glover brought the 8-week-old kitten, whom the staff at Caring Fields Felines named Davey, to Savanna Animal Hospital in nearby Jensen Beach.

As with other rescue cats that sanctuary brings, the hospital is donating time and resources to help Davey.

“We would not be able to do everything we do without the dedication and hard work from them,” Glover said.

When staff at the animal hospital took Davey’s X-ray, they realized how serious his situation was—he had a fractured cervical vertebra.

Davey needed to be placed in a full-body cast, and as Glover said, “putting him down was just not an option.”

Now six weeks later, Davey continues to improve. He lives at the vet’s during the day and with technician at night in order to give him 24/7 care and supervision.

Davey even has a an adoring foster brother: 3-year-old lad mix Oakley.

Caring Fields Felines writes on their Facebook page that Oakley “rushes to Davey’s side every time he cries.”

If Davey continues to heal as quickly as he has been, he’ll have his cast removed in three to four weeks. And then he’ll start physical therapy. Once Davey is fully recovered, he’ll be matched with a deserving forever home.

Isn’t Davey adorable? It really warms my heart to see him in such good care and recovering so well.

If you’d like to help with Davey’s medical expenses, consider making a donation. And don’t forget to share Davey’s story with all of your friends who love animals!