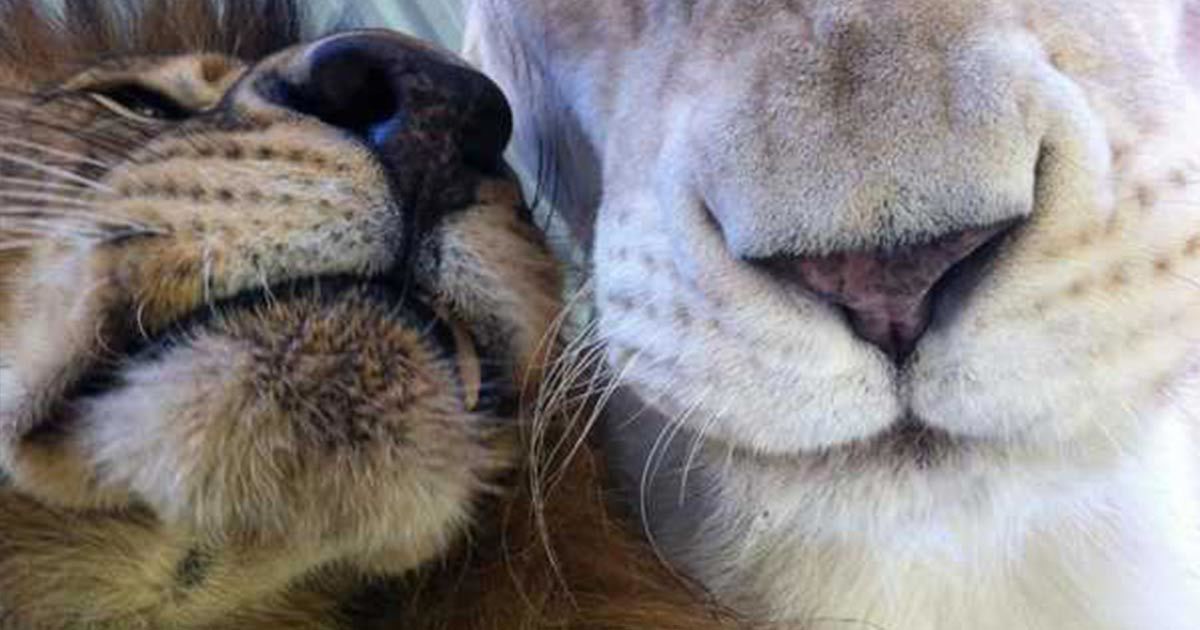 It’s hard to understand why anyone would take beautiful wild creatures like lions and force them into a life of confinement and boredom. Beyond the toll it takes on the animals physically, it also crushes their spirits. But fortunately, when animals are rescued, they often regain at least part of their joy of life—and sometimes magic even happens…

Back in 2009, the United States Department of Agriculture (USDA) received a tip that an entertainment facility in Texas was abusing the wild cats that it used to entertain people at events like weddings and birthday parties. This left the USDA no choice but to confiscate them. The USDA brought the neglected lions to In-Sync Exotics Wildlife Rescue and Educational Center, where they hoped the rescue center would give the beautiful creatures a second chance in life. And it’s a good thing they did, because when the big cats arrived, they were on their last legs. Still, two of the lions, Khan and Sheila, thrived and even ended up falling in love. Read their beautiful love story below!

Kahn was rescued along with two tigers from an abusive entertainment facility. The male lion weighed 100 pounds less than he should have and suffered from bone issues that made climbing a struggle.

Kahn’s neglect took its toll. The lion constantly chewed and sucked his tail out of stress and boredom, leaving the tip of his tail raw and swollen.

But with freedom, love, and some proper care, Kahn started to heal.

A few months later, the USDA confiscated Sheila and two male lions from the same facility. Sheila was in such poor condition, rescuers didn’t expected her to survive. She lacked muscle coordination and could barely lift her head to drink a little water.

The USDA instructed the rescue center to prepare for the worst, but the rescuers wouldn’t give up. They stuck by Sheila’s side and hand-fed her food and medicine.

But the big cat defied expectations and started to turn around.

Once Sheila was feeling better, rescuers gave her and Kahn short playdates together. It was love at first sight!

Vicky Keahey, In-Sync’s founder, told the Dodo, “Sheila spent the next few months showing off for Kahn, and Kahn strutted his stuff for her.”

Once Sheila was spayed, the couple were allowed to move in together.

Sheila and Kahn’s relationship has made all the difference for these two beautiful creatures.

Because of the generosity of In-Sync Exotics Wildlife Rescue and Educational Center, this couple will live happily ever after, and I couldn’t be more happy for them!

Please share Sheila and Khan’s story with anyone who loves animals or a good love story!