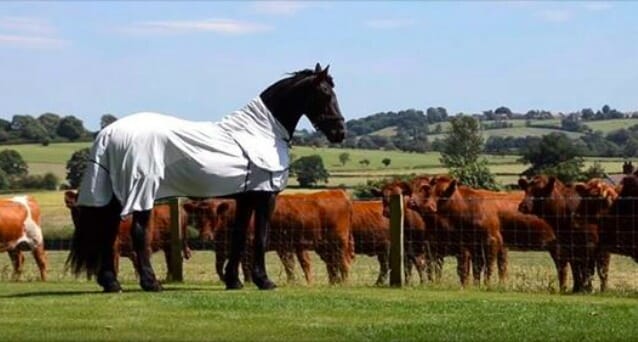 Animals can have such character. Horses in particular are not only known for their grace and strength, but also for their spectacular showmanship.

A beautiful Ster Friesian from the United Kingdom named Koning sure proves this.

When he spots his neighbor’s cows nearby one day, he becomes instantly curious. He approaches them without hesitation — then for no apparent reason, he decides to give them the show of a lifetime.

As gorgeous Koning approaches the cows, they are at first skeptical. Some back off, a bit frightened.

But they are also quite fascinated by the majestic creature. Soon, their curiosity wins over and they line up to watch him in action.

And Koning sure gives them more than they even bargained for.

He begins hopping about, performing full-heartedly for his new friends and ‘audience’. He gracefully trots around, purposefully entertaining the cows, who for their part, seem simply hypnotized by this spectacular unusual sight.

He paces himself as he elegantly gallops around the field, almost as if teasing his new friends.

Now that the cows and Koning are properly introduced, Koning approaches their fence — where he gets a little nuzzle from one of the cows!

Now there’s the beginning of a blossoming friendship!

Watch Koning in action for yourself in the video below.

How sweet and wonderful was this? Don’t forget to share with all your family and friends if you found Koning spectacular too.