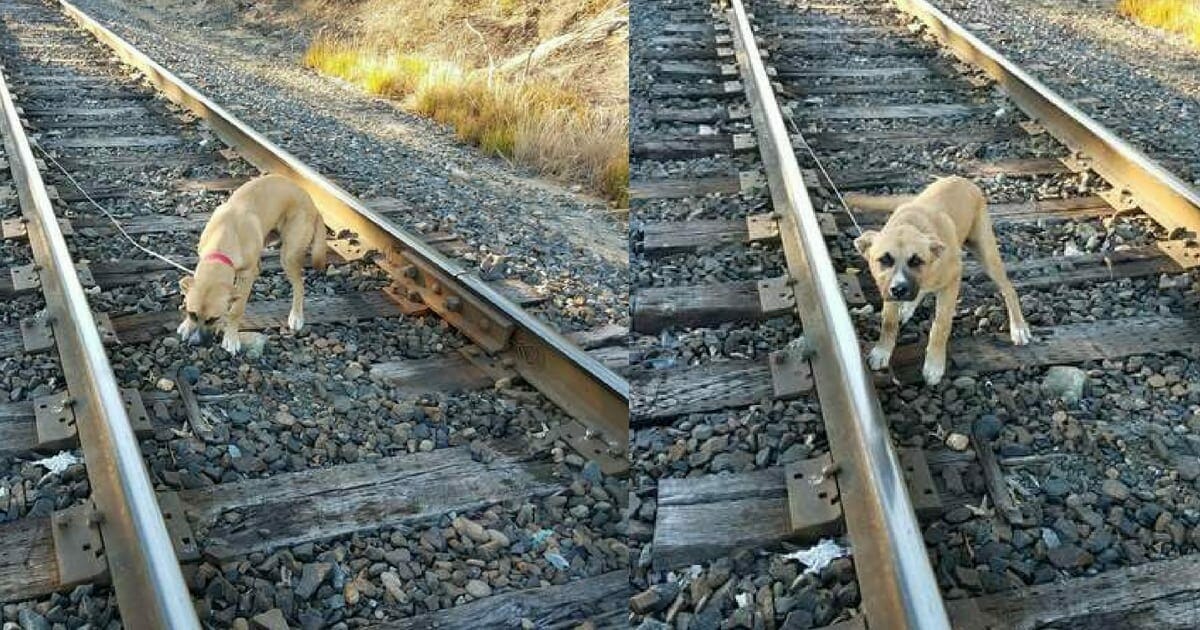 Unfortunately, there is evil in this world and it poisons the minds of some and causes them to commit terrible acts.

Jared Twedell witnessed this when he suddenly saw an innocent animal facing certain death on some railroad tracks.

The whole thing began when Jared drove out to his local recycling station, where something caught his eye.

“There are railroad tracks near the gate, and out of the corner of my eye, I caught this flicker of movement,” Jared Twedell told The Dodo. “I thought it was a deer lying on the tracks.”

Jared decided to whistle at it and hoped that the loud noise would scare the “deer” away from the dangerous area.

But the animal didn’t move, and when Jared looked closer, he realized what the animal actually was: not a deer but a puppy.

Jared also realized that the puppy was stuck to the railroad tracks and couldn’t get away.

The puppy tried to approach Jared, but the rope held him back.

Jared knew that trains often rolled through there, but he had no clue when the next train would come and how long he had to save the puppy.

But he knew that he had to try.

Jared jumped out of his car and rushed to the tracks to figure out how could help.

“He was obviously scared,” Jared says. “I was worried about whether or not he would let me get close to him. I patted my leg and said, ‘Hey, little buddy!’”

Immediately, the puppy’s tail started wagging. Then Jared also realized that the puppy needed help and would be happy if someone approached him.

Jared also realized that the puppy was dehydrated and weak. It was hot outside and someone had obviously left him there to die.

“The rope was tied in a figure eight, like you would use to tie a boat to a dock,” says Jared. “Someone did this 100 percent on purpose. It just made me sick.”

Jared eventually managed to get the puppy loose and get him out of harm’s way before a train approached.

Then he decided to make the puppy the newest member of his family.

He loaded the dog, whom he called “Train,” into his car and drove home.

However, when he got home, Jared’s family decided that Samson was a better name.

Samson got a good bath and quickly got to know the family’s other pets: two other rescue dogs, some cats and a Flemish giant rabbit.

The new friends welcomed Samson into their home with open arms.

“The dogs have all been getting along great. All they’ve been doing since I brought Samson home is play,” says Jared.

Isn’t it lucky that Jared saw Samson when he did and that he got out of his car to make sure everything was alright?

Share to pay tribute to Jared and all the other wonderful people who look out for animals in danger and do everything they can to give them a good life!