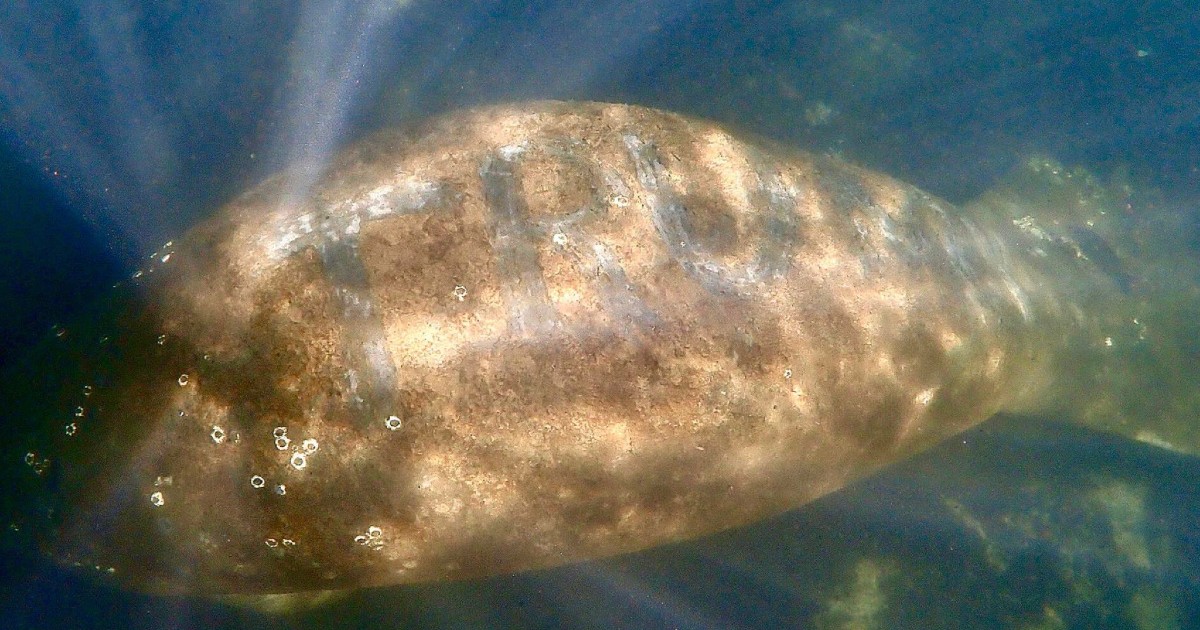 It’s safe to say that this is an unusually tense time in American politics, but regardless which side of the aisle you’re on, we can all agree that animal cruelty is a serious crime.

Which is why one incident has prompted so much outrage: a manatee was recently found with the word “TRUMP” etched into its back. It appears someone seriously disturbed an endangered animal to send a political message.

The manatee was found in the Homosassa River in Citrus County, on the Gulf Coast of Florida. The area sees an influx of manatees at this time of year, and they are a popular tourist attraction, accessible to swimmers and boaters.

Boat captain Hailey Warrington was giving a tour when she noticed one of the regular manatees looked a little different. She then realized someone had engraved the president’s name in algae on the manatee’s back.

The captain was surprised and disturbed by the sight: “It was an uncharacteristic thing for us to see,” Warrington told FOX 13. “I was surprised when I saw it.”

The perpetrator scraped the name into the algae, exposing the animal’s skin. It isn’t clear what damage has been done, but manatees are vulnerable to scarring, and the incident likely left the manatee shaken.

“It did seem that the animal was very upset,” Warrington recalled.

“It’s a little hard to see the extent of damage from the video. It is harassment regardless,” Ruth Carmichael, a Senior Marine Scientist at the Dauphin Island Sea Lab and a Professor of Marine Sciences at the University of South Alabama, told Vice.

“If the scrape penetrates the skin, then it likely caused some pain and stress. The animals have nerves and sensory hairs in the skin. Additionally, open wounds could become infected.”

And of course, the incident comes at an extremely charged moment in American politics, coming just days after Trump supporters stormed the Capitol following the president’s efforts to overturn the election results.

It isn’t known who did this or what their motivation was, but the fact that someone harassed a wild animal for an apparent political message has caused widespread outrage.

Douglas Nowacek, Repass-Rodgers University Professor of Conservation Technology at Duke University, told Vice it was “one of the most horrifying things I have ever seen done to a wild animal.”

“I have no words to express how deeply troubling, thoughtless, and potentially cruel this is,” Ruth Carmichael said.

“Manatees aren’t billboards, and people shouldn’t be messing with these sensitive and imperiled animals for any reason,” Jaclyn Lopez, director of the Center for Biological Diversity, told the New York Times.

Manatees are protected federally under the Endangered Species Act, and by state law under the Florida Manatee Sanctuary Act of 1978, which makes it illegal to “intentionally or negligently… annoy, molest, harass, or disturb any manatee.”

The writing on the manatee’s back is thought to violate both laws According to the Times, a federal conviction has a fine of up to $50,000 and a year in prison, while violation of state law carries a fine up to $500 and 60 days in jail.

So far no suspect has been named, but according to the Citrus County Chronicle, a federal investigation is underway led by the United States Fish and Wildlife Service, who are asking anyone to come forward with information. The Center for Biological Diversity is also offering a $5,000 reward for info, according to FOX 13.

The poor manatee… no animal should be harassed like this, especially not for a political statement. We hope investigators get to the bottom of this and the perpetrator faces consequences!