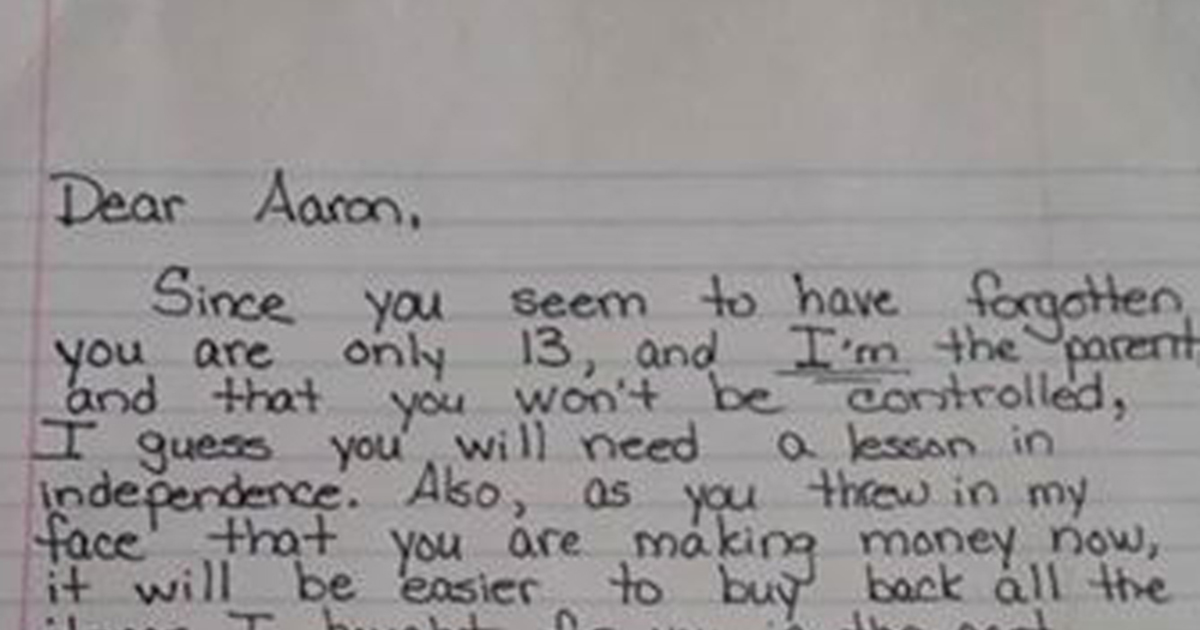 Everyone who has a teenager knows that getting them to cooperate isn’t always easy.

They’re happy to get chauffered around, eat your food, and get their allowance, but ask them to do their homework, and they start laughing and walk away or perhaps just lie about.

It’s frustrating, but as a parent, you can rest assured—you’re far from alone.

It all began when Heidi Johnson discovered that her son Aaron had been lying to her. Aaron, 13, had just started working a little on the side posting videos on YouTube, and it quickly went to his head.

One day when Heidi asked Aaron if he had finished homework, he lied and claimed that he had already finished it. But when she pressed further, it became apparent that he was lying. And that’s when he admitted that he had a job to do and that he thought it was more important than his school work.

Heidi realized that she had to do something drastic for her son to understand what was best for him. So she decided to write him a letter.

Since you seem to have forgotten that you are only 13 and I’m the parent, and that you won’t be controlled, I guess you will need to learn a lesson in independence. Also, as you threw in my face that you are making money now, it will be easier to buy back all the items I bought for you in the past.

Also you will need to empty the trash Mon, Wed & Friday as well as sweep and vacuum those days. You will need to keep your bathroom clean weekly, prepare your own meals and clean up after yourself. If you fail to do so I will charge you a $30 maid fee for every day I have to do it.

If you decide you would rather be my child again instead of a roommate, we can negotiate terms.

She took a picture of the letter and posted it on her Facebook page, but didn’t know that people other than her friends and family might be able to see it. And when she woke up the next morning, Heidi had over 100 new friend requests and wondered what had happened.

Why publicly shame him? I’m not. It was an accident. I meant to post to just family and friends; and yesterday I couldn’t figure out why I had over 100 friend request. I actually thought maybe my account got hacked or something. Yes, I could take it down, but so many people have already read and seen it at this point.”

Many posters praised her for her child-raising method, while others thought she was too harsh.

However, the letter seems to have worked, and Heidi and Aaron have established a contract with rules that Aaron actually seems to follow.

“I’m not a bully dictator trying to ‘control’ my child. I am a parent who has every RIGHT to have rules, expectations, and consequences for my child.”

Do you think Heidi was too tough on her son, or was she right to put her foot down and post her letter online?

Share this article with your friends on Facebook if you also think that all children need a proper education!