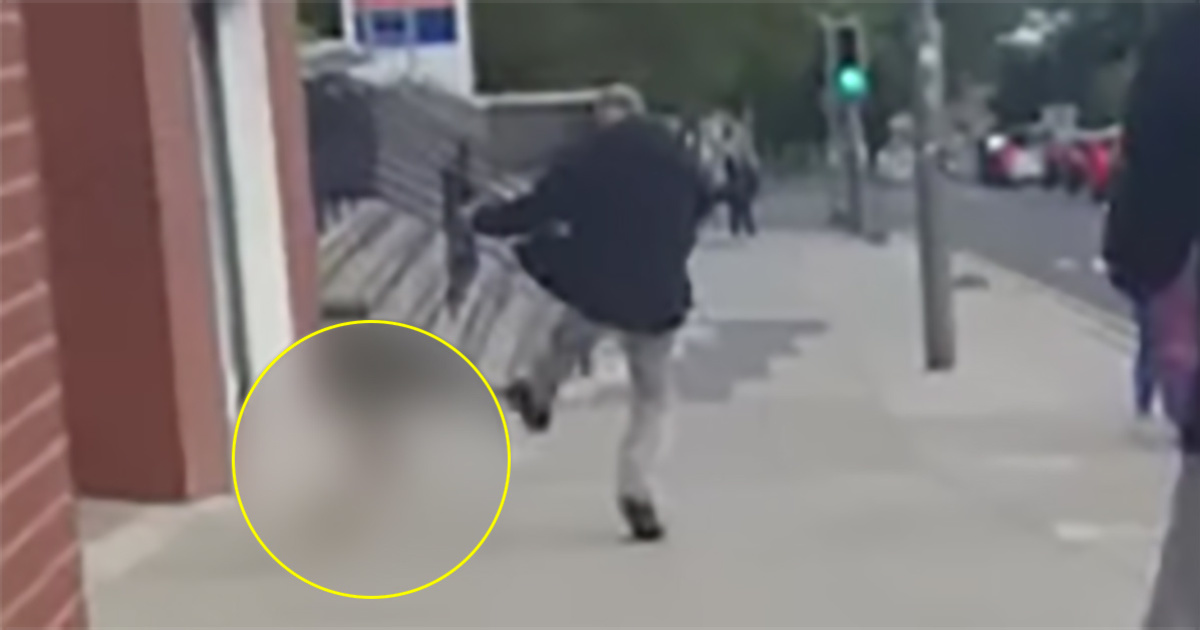 As unfathomable as it might be, cruel people do exist in this world. People who hurt animals for no apparent reason, for example. And we need to do our best to keep all animals away from these sick people.

This man is a perfect example of the type of cruel individual I am referring to. He was spotted In Liverpool, United Kingdom, kicking his dog in the head. Now, a video clip capturing the awful act is spreading online.

Please note that some readers may find the images below distressing.

The incident took place in August 2017 on a main shopping street in the center of Liverpool, United Kingdom.

A middle-aged man is seen walking while violently jerking at his jack russel terrier’s leash.

When the terrified dog doesn’t walk as fast as the owner wants him to, the man gets mad and kicks the dog with full force on his head.

The man is quickly surrounded by a group of stunned and angry people who witnessed the incident. It is understood that they then contacted the police.

“We will never tolerate this kind of cruelty towards animals,” the Royal Society for the Prevention of the Cruelty to Animals (RSPCA) told the Liverpool Echo.

“We are pleased that there are people who are willing to stand up for animals, however we do recommend that anyone who witnesses animal cruelty contacts the police or the RSPCA and allow specially-trained officers to deal with the situation.”

While waiting for the authorities to arrive, the man started to walk away quickly. Shop owner Michael Lamb, who witnessed the incident, decided to follow the man.

He felt he simply could not let the dog remain in this man’s care. He eventually arrived at the man’s apartment.

“I shut the shop and walked up there, knocked two or three times and I could hear the dog barking,” he told the Liverpool Echo. “My first impression was ‘I am taking that dog away from you’.”

After confronting the man, Michael managed to rescue the dog and take him to the veterinarian.

Luckily the pet had not suffered any serious injuries.

At last, the dog was in safe hands with animal lover Michael, who’d shown an extraordinary act of compassion.

And as a thanks to his hero, the dog made sure to give Michael plenty of kisses!

Thanks, to witnesses, the man in the clip has been identified and a police investigation is currently underway.

It was later discovered that the man was not the dog’s actual owner. He was looking after the dog temporarily.

The dog is now in safe hands and is being looked after by authorities. Where his new permanent home will be remains to be seen — what’s certain, however, is that he won’t be going anywhere near the man who beat him.

“The RSPCA is working with the police and everyone involved to ensure the best possible outcome for the dog,” the organization told the Liverpool Echo. “Our main priority is the dog’s welfare and we are glad to hear that he is safe.”

Watch the incident in the clip below. Warning: Disressing images.

Thank goodness this dog was rescued and put in safe hands!

Please share to honor this incredible hero and to shed light on animal cruelty so that it ends once and for all!