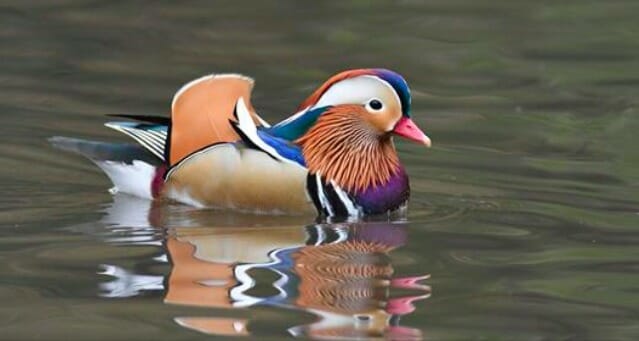 The animal kingdom is a fascinating, dazzling world. Animals intrigue us — from their appearance, to their behavior, to their incredible instincts.

Birds are particularly interesting. There are thousands of different kinds of birds out there, some small, some big, some monotone, others — ultra-colorful.

It’s no wonder that birdwatching is such a popular pastime, with amateurs and professionals alike keen on learning about and of course ‘watching’ the huge variety of birds around the world.

It comes as little surprise then that when one unique, unusual bird was seen in New York’s famed Central Park, experts and birdwatchers went wild.

Mandarin ducks are native to East Asia, so when one was spotted all the way in the US, the colorful little guy sure produced a frenzy.

Indeed, Mandarin ducks are not expected to be floating around a pond in the middle of Central Park — so this one of a kind duck left everyone baffled and gathered a crowd.

The spectacular little duck was first spotted in a pond in the southeast corner of the park, and immediately drew the attention of both amateur and expert birdwatchers and scientists alike.

The Manhattan Bird Alert tweeted a video of the male Mandarin duck, writing “The Central Park Pond’s newly-arrived male Mandarin Duck (we still do not know how it got here) unseated the Wood Duck as prettiest duck in the park.”

The Central Park Pond's newly-arrived male Mandarin Duck (we still do not know how it got here) unseated the Wood Duck as prettiest duck in the park. Gus Keri brings us close-up video pic.twitter.com/cauqVt4kSK

How did it get there?

Theories as to how the unusual little guy ended up in one of the world’s most famous parks quickly circulated. At first, experts believed he might have escaped from a nearby zoo, but this was verified and set to rest: the duck did not come from any of New York’s four major zoos, according to Craig Piper, a director with the city zoos.

Another theory is that the duck was being kept as a pet before its owner got tired of him and left him to socialize with other ducks in Central Park.

What remains certain is that the duck is leaving no one unimpressed.

“He’s the star of the show,” Juan Jimenez, a photographer who has been taking pictures in Central Park for decades, told the New York Times.

“As far as the colors are concerned, only nature can provide that,” he added. “We could try to paint it, but you won’t be able to.”

Unless in need of medical attention, city officials say the duck will be left to roam and quack around with his newfound friends: a group of (much more native) mallard ducks.

This story just brought a big smile to my face. How do you think this dazzling duck got to Central Park, but share your theories in the comments.