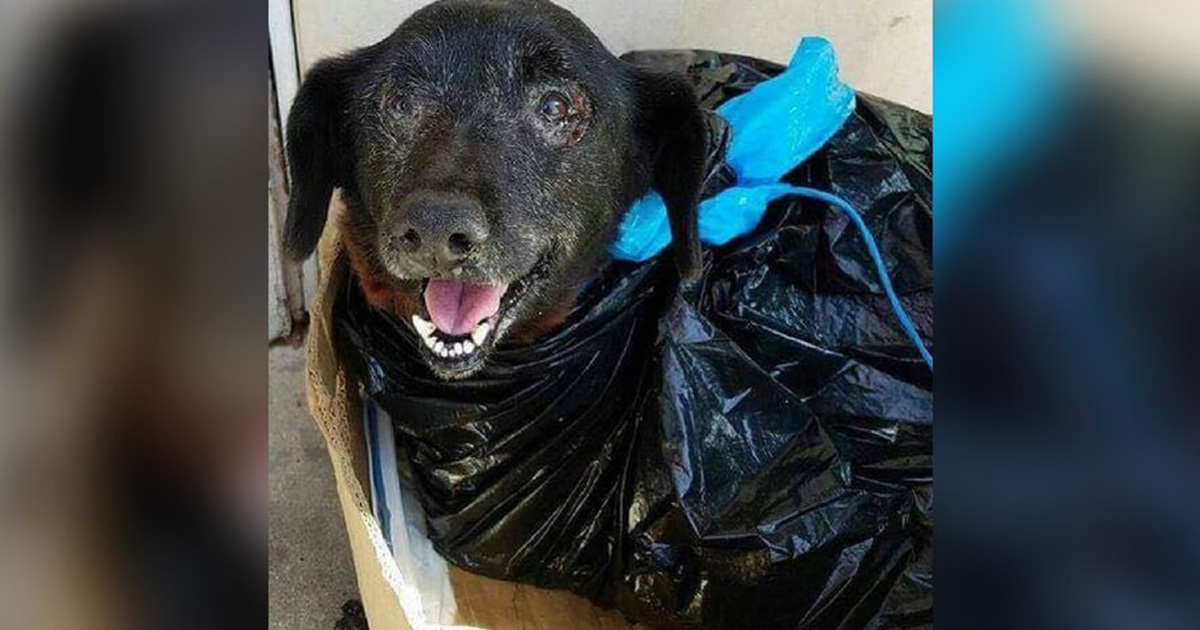 Blackie was suffering and in pain.

Her owners had lifted her up, put her in a trash bag, and wrapped tape around her neck to stop the bleeding.

Her old body was in rough shape and I can’t imagine what she was thinking in the car for what might have been her last car trip.

From nose to tail, Blackie’s whole body hurt. She was crying, her tail was bloody and riddled with untreated wounds.

But the day her owners abandoned her, everything changed.

Blackie was abandoned at an animal shelter center in southern California that was already full of other stray animals.

And her future might have been bleak, but a woman named Kelly Smíšek happened to walk into Blackie’s life.

She took a close look at the dog, who was left at the animal center in a trash bag, and saw love behind Blackie’s tired, yet glowing eyes.

She couldn’t just leave Blackie there, so she persuaded her husband, Andy Smíšek, to bring her home.

It wasn’t difficult because the couple are real animal lovers. They’re the founders of an animal welfare organization called Frosted Faces Foundation.

The organization serves “senior animals whose love and lives are in jeopardy,” according to Frosted Faces Foundation’s Facebook page.

Blackie was a perfect candidate for receiving the organization’s support because of her age, condition, and because her owner refused to financially assist the animal welfare center where Blackie was abandoned.

Just look at that tail! My heart bleeds but at the same time boil with anger! Animals shouldn’t be treated like this.

When Blackie came under Kelly and Andy’s care, she immediately got lots of love and was well taken care of.

“Blackie is so small, wants to be held tightly and just wants everything to turn out okay because she keeps looking at us for recognition and approval,” they explained on Facebook.

When a doctor took a closer look at Blackie, they discovered that the bleeding on her tail was coming from a tumor.

The vet also said that the wonderful 10-year-old had probably been neglected for most of her life.

Blackie’s tail had to be amputated, and with it, her cancer disappeared. Blackie would live another day to finally get the life she deserved.

As Blackie recovered from her surgery, Kelly and Andy noticed that she was enjoying life more. Blackie was able to play in a way they couldn’t imagine when showed up at the animal center in a trash bag.

Now she could run, play—and above all enjoy life.

When Blackie had her health back, Kelly and Andy started looking for a new loving home for her. The vets explained to them that Blackie probably had between three and four healthy years left in her life.

And then on April 29th, it happened… Blackie was adopted!

Kelly and Andy posted this picture on Facebook saying that Blackie was now “a little ball of fire and ready for a new life!”

When asked how Blackie was doing, Kelly and Andy answered, “Blackie, the dog surrendered in a trash bag to Carson Shelter, is doing well in her new home.”

It also turned out that Blackie got a new name!

“Her new name is Betty and she fits right in perfectly and her family said they love her already!” they wrote.

Betty’s life has been marked by tragedy and pain. But now she has one last chapter in her life to enjoy her golden years in a loving environment. I hope she enjoys it!

Even though Betty was treated so badly treated by her previous owner, she never stops showing her love!

Please share Betty’s story with all of the animal lovers in your life.