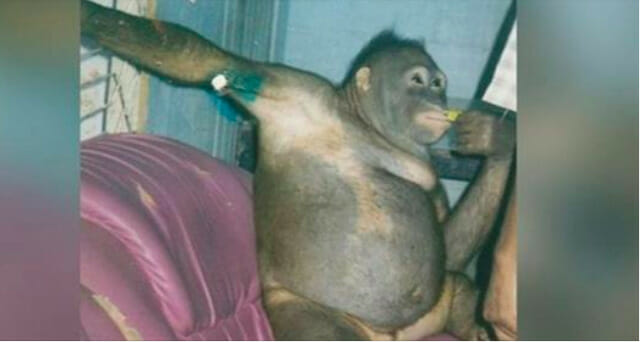 Some stories are painful to write. But I also know how important it is to bring attention to some of the cruelties that sadly occur around the world in an effort to put an end to them.

One such story is that of orangutan Pony. Pony was shaved, adorned with jewelry, makeup and clothes and then forced to have sexual contact with despicable men — all so some could profit off her for dirty coins.

Pony was separated from her mother when she was just a baby. She was brought to a brothel in Kereng Pangi, Indonesia, where she was chained and became a prisoner.

She needed to be taken care of by women as she was deeply terrified of men —  unsurprising based on what she was put through.

According to media reports in La Vanguardia and ABC, Pony was forced to prostitute herself for several years. To look more ‘feminine’, she was shaved, had makeup applied to her and was adorned with clothes, jewelry and perfume.

Some men apparently think that this is attractive, and for only a few coins they could use her sexually. Actual women worked at the brothel, but customers specifically requested Pony.

Several animal organizations reported the unspeakable violence against Pony to local authorities. An extensive investigation was initiated by the Conservation Agency for Natural Resources in Kalimantan (BKSDA) in cooperation with the Borneo Orangutan Survival (BOS) Foundation.

“When I found that she was used for prostitution and not just a pet I was horrified,” conservationist Lone Droscher-Nielson told The Sun. “Perhaps in my naivety I had never thought it humanly possible to do such a thing to an animal.”

By the time Pony was rescued, she had suffered both mental and physical injury. It took a long time for her fur to grow out again as she was being shaved every day. Without hair to protect her fragile skin, she had many mosquito bites and other skin problems.

The abuse she suffered left her with deep trauma.

“When a man came near her in the animal shelter, she went to a corner and peed herself. She was terrified of them”, says Karmele Llano, head of animal welfare organization International Animal Rescue.

BOS took Pony in to treat her. They gave her food, safety and love. Unfortunately, due to the profound abuse she’d suffered and the fact that she’d been separated from her mother at a young age, she would not survive out in the wild.

She is therefore today residing in a wildlife sanctuary, in a natural and healthy environment.

There, Pony could slowly recover and indeed, her strength and resilience has left everyone impressed — she has gradually began to trust in people again.

It warms my heart to know that Pony was rescued from the terrible life she was exposed to and given a second chance. No animals should ever have to deal with anything like what happened to Pony. Share if you agree.