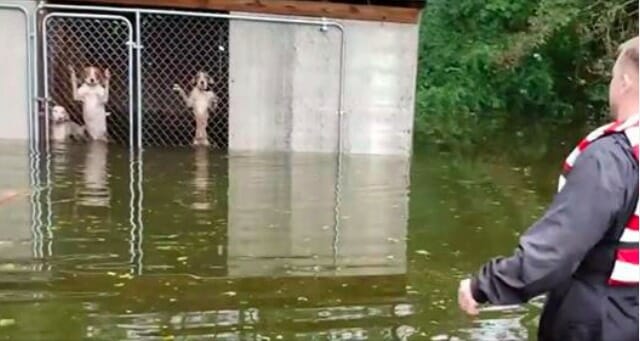 Dogs are man’s best friend. That’s a fact so many of us already full-heartedly agree with.

That’s what makes it so difficult to understand how some dog owners neglect their animals, or simply leave them behind on purpose.

We saw this happen with six dogs in North Carolina, who had no chance of survival after being left behind in flooded cages following the Hurricane Florence disaster.

Thankfully, there are still people in this world with hearts of gold.

As soon as humans are in danger, they fight with all their might to ensure their safety and survival.

This is precisely what has been happening for many North Carolina residents, after Hurricane Florence raged through, taking lives and forcing countless to evacuate.

But many residents are being reported for leaving their pets behind, whom simply can’t fend for themselves. Them being left behind is synonymous with death in the rising floodwaters that have accompanied the hurricane.

One dog owner from Leland, North Carolina, left six dogs behind — in a locked kennel.

Fortunately, they were discovered by a volunteer rescuer who immediately knew exactly what he had to do: save their lives.

The water had already risen so high that it reached their necks. The desperate animals could not free themselves. The owner had locked the kennel, leaving their fate strictly at human hands.

His appeal is loud and clear: “BRING YOUR PETS WITH YOU! ”

Take a look at the heroic, last minute rescue in the video below:

All six dogs were rescued and are safe now. But I don’t want to think about the number of pets falling victim to the hurricane.

Please be sure to share this post so that more people watch over their animals and keep an eye out for other animals that may have been left behind following natural disasters. “Leave no dog behind.”