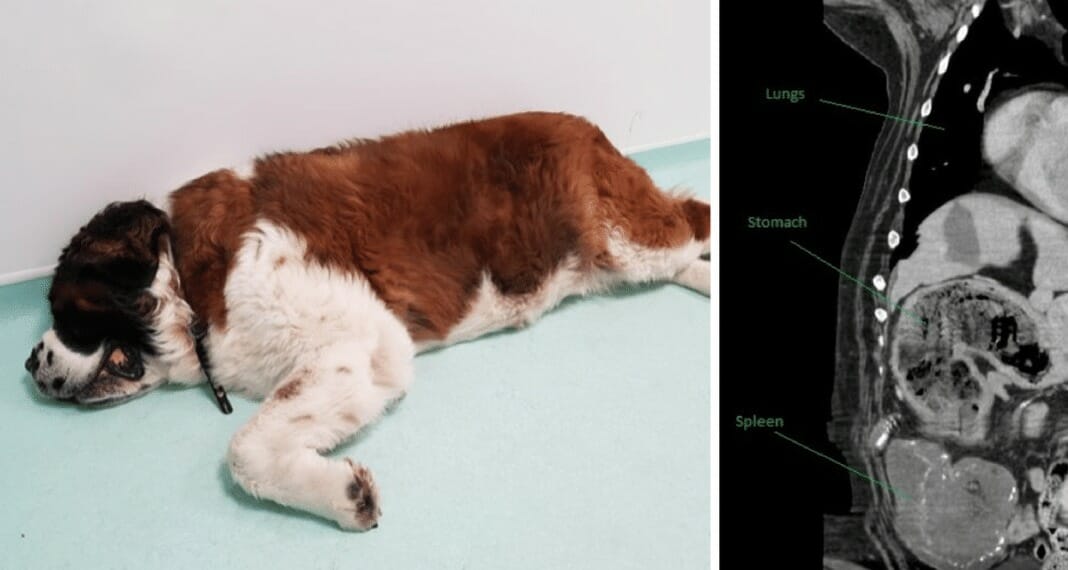 Maisy is an 8-year-old Saint Bernard from England who’s always had plenty of energy.

Like most other dogs of her breed, Maisy is a calm and harmonious family pet. She’s child-friendly and is happy so long as she’s getting the love she needs.

Recently, however, she gave her owner a serious fright.

It was discovered that Maisy had a huge lump in her stomach.

Jane Dickinson, Maisey’s owner, had become worried when her dog refused to eat like she normally did.

She decided to take her peaceful pet to the vets for a check-up; she was keen to know what was going on.

Event though she told herself it was just a routine appointment, Jane knew there was something wrong.

Soon she got the news no pet owner ever wants to hear.

An X-ray revealed that Maisy had a large mass close to her spleen. Both the veterinarians and Jane feared that it was a cancerous tumour.

Surgery was Maisy’s only option; her last hope. She was taken to Paragon Veterinary Referrals in Wakefield.

Veterinarian Nick Blackburn was responsible for Maisy’s surgery, with the idea being to remove the spleen.

During the surgery, however, he found something surprising. The poor dog’s belly was swollen for an unexpected reason.

It turned out that Maisy’s stomach was filled with teddy bears and other toys.

“I think we can say with certainty that this was not what we expected to find,” the animal hospital wrote in a statement.

Maisy didn’t have cancer after all! She was just filled with stuffed toys!

After the removal of the objects, she resumed life as a happy and playful dog. Jane was able to breathe a deep sigh of relief.

“When Maisy entered the operating room, I thought, ‘Will she come out?'” Jane told The Dodo.

But she did, and now the big dog is enjoying her life once more – she’s got all her energy back!

They eagerly awaited her return from hospital and were enthralled to see her.

As for the toys, Jane says: “The toys were not even her’s! She usually steals the other dogs’ toys and plays with them, but I’ve never seen her try to eat them.”

Share this with all the animal lovers you know if you, too, were pleased that the story had a happy ending!