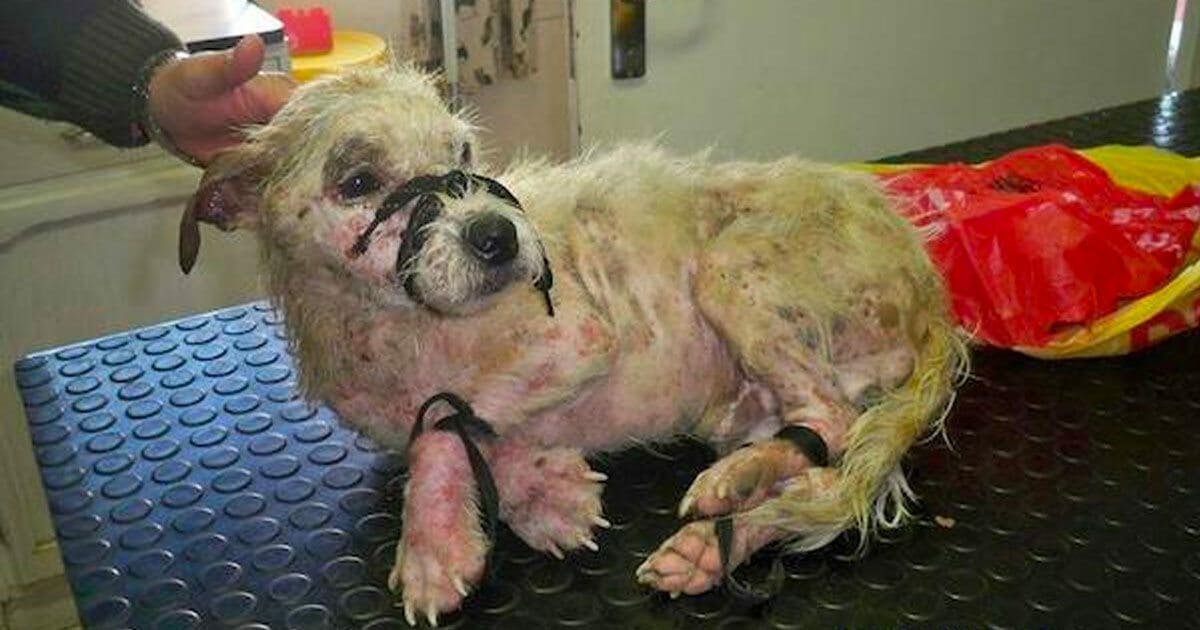 Some people simply cannot be trusted with animals.

Despite ongoing efforts to eradicate animal abuse for good, it remains a huge problem worldwide.

I often ask myself ‘why would anyone hurt a pet that loves them unconditionally?’ I spend hours trying to find a suitable answer, then I go online and find cases like the one below… and despair all over again.

Lourens van Wyk is a retired pastor living in Cape Town, South Africa, and one day made a truly harrowing discovery when driving by a set of railroad tracks.

He saw a strange-looking plastic bag and decided to investigate. What he found left him shocked.

Van Wyk knew something wasn’t right when he saw a mysterious plastic bag seemingly dumped by a set of railroad tracks. He decided to take a closer look – part of him expected to find an abandoned baby in there – and when he did he was left reeling.

In the bag was an extremely abused pup that had been tied up with shoelaces to restrict its movement. It couldn’t move, couldn’t bark and could hardly breathe.

The pastor immediately jumped into action and took the pup – who would later be named Trax – to a veterinarian.

He then reached out to the Helderberg Animal Welfare Society outside the city, where Trax could receive all the help he needed to make a recovery.

Van Wyk decided that he couldn’t untie the shoelaces restricting Trax himself – the dog was simply in too much pain. Fortunately, the kind people over at the welfare society were able to relieve Trax of his bonds.

The organisation wrote on their Facebook page: “A little update on Trax – the doggy who arrived at our kennels yesterday after being rescued off the train tracks, in a plastic bag with his mouth and 4 feet tied together. After cutting all the ropes off him, our vet examined him and he got a thorough health check.”

The vets believed that Trax had sustained heavy trauma to his head and had suffered from multiple concussions in the past. The crew at the animal center gave him tender love and care for a few days and, slowly but surely, he began to improve.

“Besides the fact that he has mange and is covered in sores, scabs and wounds- he is otherwise healthy. He is still quite young. He has had a warm bath, is eating very well, and is responding so nicely to all the TLC and love we are giving him! He loves to be with us and likes to gently paw us for some extra attention. His tail is wagging a little and we know he feels safe, relaxed and loved. He spent most of today sleeping in his bed (under 2 blankets) so has really been snug and warm in this cold weather!” An update read.

A couple of weeks later, Trax was ready to be put up for adoption; a fantastic turnaround given the severe nature of his condition.

Two years after being found, tied in a bag by a railway, Trax is with a loving family and doing better than ever.

It never ceases to amaze me just how despicably horrid some people can be. At the same time, it’s also a pleasure to witness the extent people will go to in a bid to right the wrongs of others. The heroes who saved Trax deserve tribute!

Share this article if you think ALL animal cruelty should be met with harsher punishments.