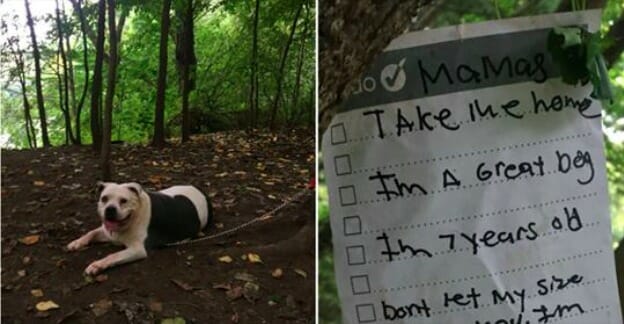 There are a variety of reasons pets become abandoned, and while none or excusable I do feel some are at least more understandable than others.

There’s no way to be certain why one pit bull was left abandoned, tied to a tree in a middle of a New York park — but what we can assume is that whoever left the dog there did do so with at least some good intention in mind…

They’d made sure to leave a note on a tree next to the dog.

Thankfully, it didn’t take long before the dog walker was discovered, and luckily it was by a great soul — that of a man named Eric Maus.

A dog walker himself and thus already very fond of ‘man’s best friend’, Eric was out with two of his clients, Gouda and Lily, through Prospect Park when he encountered the abandoned dog, a pit bull he soon discovered couldn’t be more gentle.

“When I was walking up to the waterfall, across the bridge, I saw this really big, chubby pit bull tied to the tree,” Eric said. “I looked around and I called out to her, ‘Hey, where’s your owner?’”
Although uncertain about what exactly he should do, Eric knew one thing for sure: he could not just leave the dog there.

“I didn’t know what to do, but I wanted to help her,” he said. “Prospect Park isn’t a good spot for a dog to be alone.”

Eric then noticed that a note had been erected next to the abandoned dog. “Take me home. I’m a great dog,” it read. “Don’t let my size scare you. I’m sweet.” Mamas was the dog’s name.

And Eric could see that what the note pointed out about Mamas was entirely true.

“The pit bull was being so sweet and so gentle,” he said. “She was just laying there, tongue out, so cute.”

Eric took Mamas and posted her photo to a neighborhood Facebook page. Not even five minutes later, people were responding, including a wonderful soul who agreed to meet Eric and Mamas by the tree to arrange to bring them by car to Sean Casey Animal Rescue, a shelter nearby.

Once they arrived at the shelter, Mamas was as happy and calm as ever.

“When we took her out of the car it seemed like she was ready,” Eric said. “She basically jumped out of the car — which was a really good sign. She knew that she was safe.”

Mamas appeared to have a bladder infection and was however walking rather slowly. Thankfully, she is now receiving all the love and care she needs by the shelter’s veterinarian.

“She’s settling in well and she likes everybody and everything,” a spokesperson for the shelter told The Dodo.

And once this sweet dog is cleared bill of health from the veterinarian, she’ll be ready to start the next chapter of her life.

I am so glad sweet Mamas was rescued and in good hands now! Share her story to spread awareness about her potential adoption… Who knows you may help her find a forever home in no time at all!