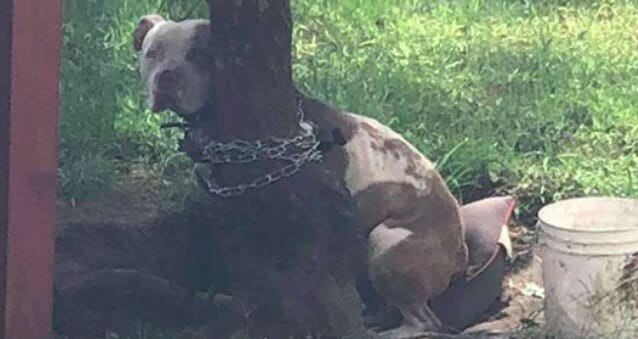 All stories of animal abuse make my skin crawl. Little upsets me more than someone hurting an innocent creature that simply can’t fend for itself.

Unfortunately, we continue to hear about these stories through social media. They are never acceptable and we have to do everything we can to protect the vulnerable.

Thankfully, that’s exactly what some people are doing out there — and some of these stories, like this one here, end well.

It sounded like a terrible rumor, but tragically, it wasn’t. News of a pit bull, tied tightly to a tree in someone’s backyard reached Kerry Haney, a volunteer with Don’t Bully Us Rescue.

The dog was tied so tightly to the tree that he could barely move his head, let alone eat or drink. And he remained in that dreadful situation for days on end.

Kerry was alarmed at the sound of something so horrifying and immediately knew she had to take action. She immediately headed out to the house in question, but upon arrival, the dog, named Max, was nowhere to be found.

As it turns out, the police had also been notified of the dog’s inhumane treatment and had thankfully intervened. No civil society should ever see animals treated in such a way.

Still it took some time for the police to manage to get the appropriate paperwork done before they could help the poor pit bull out of his misery. When all was in order, they could finally visit the house once more — and finally, save Max.

Max was placed at the Gloucester County Animal Shelter where he was cared for until a court hearing, thankfully, found his owners guilty. They were fined and it was official: Max would never have to return to his abusers ever again.

At the shelter, staff discovered that Max had heartworm and was also failing some basic behavioral tests. The whole time, Kerry couldn’t get poor Max out of her mind. So when the shelter reached out to Don’t Bully Us Rescue to ask for their help, she was thrilled to take Max in.

Kerry soon became Max’s temporary adoptive mother and tried as hard as she could to amend his past horrors. The more she got to know Max, the more she discovered that how sweet and playful he was — really just a puppy in a an adult dog’s body that had never had a real chance to enjoy life.

“He’s a goofy big pup,” Kerry told The Dodo. “He loves to play… more than any dog I’ve ever seen. And if you are sitting on the floor or couch, don’t think you’ll have any personal space. He will be on you in the drop of a dime.”

Max had never been properly trained, and so Kerry had to patiently start at scratch. Gradually, Max began to understand that Kerry had nothing but his interest in mind, and the two warmed up and became the best of friends.

“He hangs with me in my office every day,” Kerry said. “He just chews on his bone while I work and he never barks at the mailman or kids passing by. He is an absolute pleasure to have.”

The only thing left for this sweet pup is to find a forever home where he will be treated with love for the rest of his days. And I sure hope that happens soon for this well deserving sweetheart!

All dogs deserve a loving home! Share if you agree.