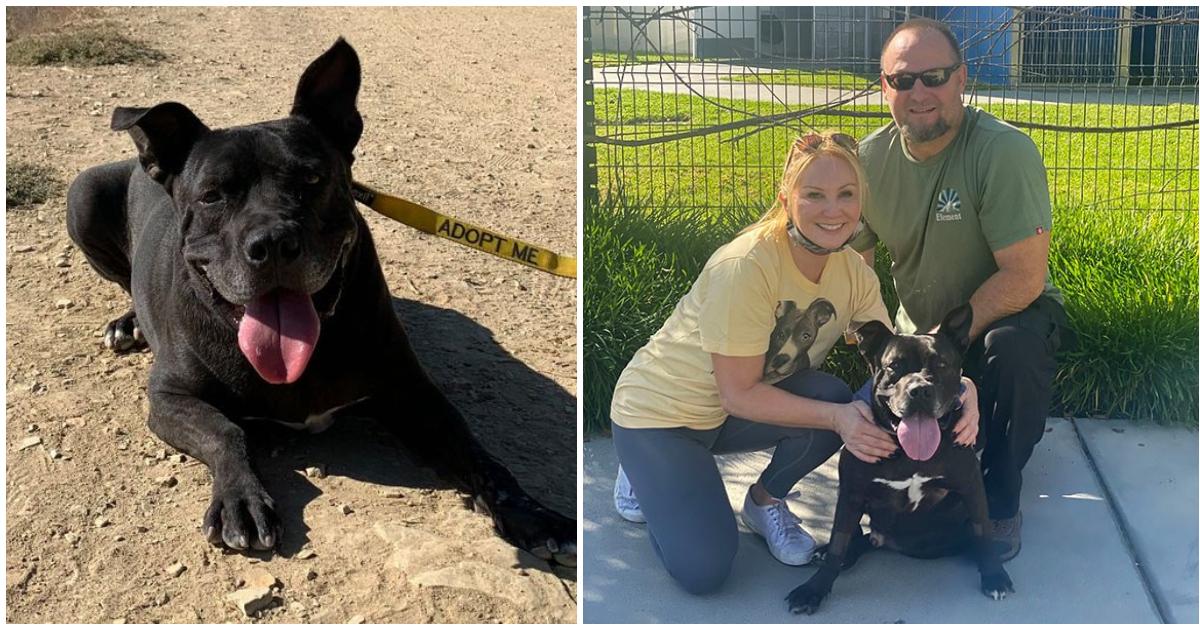 There are many dogs in shelters waiting to be adopted, but it can take some longer than others to find their forever homes.

Sometimes it takes months or even years — but when that day comes, it’s an incredible moment. Now, one shelter is celebrating the adoption of a dog who had been with them for 667 days.

Melvin the pit bull has spent much of his life in the care of spcaLA. Despite all their best efforts, they had difficulty finding the right home for him.

In his time at the shelter, Melvin proved to be a loving and talented dog.

“Melvin has learned many tricks and skills like sit, down, hand target, place training, loose leash walking, fetch, roll-over, and paw,” spcaLA wrote. “He enjoys being around people, and is just as content to lay by your feet as to chase a ball.”

But for no reason of his own, Melvin was constantly passed over by adopters. Maybe it’s because pit bulls, with all the negative perceptions around the breed, are less likely to be adopted. It could also be partly due to “black dog syndrome,” where dogs with black coats are passed over.

“Despite all his talent and good humor, no one has given him a chance at a real home,” spcaLA wrote. “Melvin’s biggest challenges at finding a home may be the two things he cannot change: the color of his coat and his breed.”

But while it was difficult, the shelter didn’t give up on Melvin. They knew that there was a perfect family for him out there.

As months passed, Melvin got the special attention given to their long-term dogs.

“A dog with a long length-of-stay like Melvin’s receives hours of training and daily enrichment in order to remain mentally and physically resilient and stable in the shelter environment,” said Sara Taylor CABI CPDT-KA, spcaLA Director of Animal Behavior & Training, in a press release. “There is also a significant emotional investment because we become their interim family, waiting for someone to give them a chance to become a companion.”

Melvin is now 3 years and 10 months old. The spcaLA was expecting he would be spending another birthday in their care.

Instead, something incredible happened: Melvin finally found his forever home!

While it took a long time, Melvin finally has his happy ending, and it seems he found the perfect home.

“Melvin’s new family has years of large breed experience, and room in their hearts for another dog after the death of one of theirs. Melvin now has two Pit Bull siblings to call family,” a Facebook post explains.

We’re so glad Melvin finally has a home! What a great day for everyone involved. Thank you to this family for adopting him!